One of my teammates, Lisa, enlarged our BCAPL 2012 Women's Open Team winning photo for Carl, the owner of Diamond Jim's in Arlington, Texas.  She sent me a pic of it, but I couldn't tell how large it really was.  Then she said she was going to frame it in with barn wood, and I wasn't sure what that looked like.

There was  a Scotch Doubles tourney at Diamond Jim's on Saturday that I played in and so Lisa brought the framed photo by.  OMG!  It was beautiful!  So much more awesome than I imagined!

Here are some photos.  I hope you can tell how large it is.  Carl is standing near it, and also hanging it up in the photos.  He pretended to be shy and not excited, but I think as the day went on and he had to find a place to hang it, he became more proud.

Diamond Jim's was our home pool room and Carl even bought us our shirts.  We were SO happy someone took a little interest in our team and helped us out.  And turns out we WON!  And now Carl is the proud owner of a National Champ photo.  :) 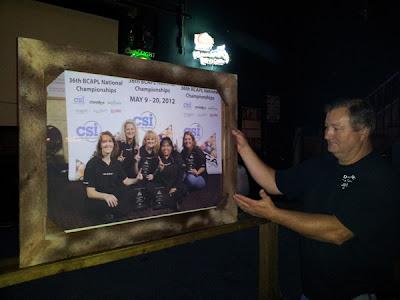 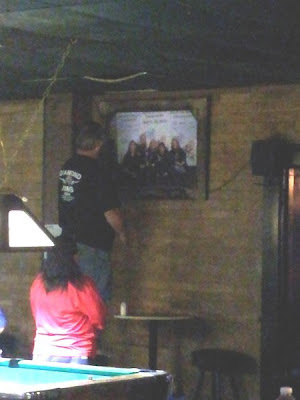 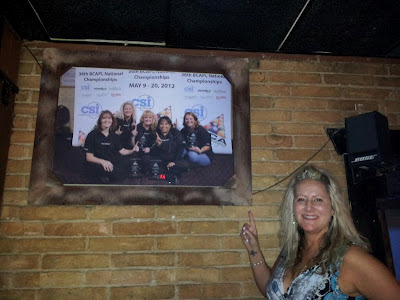 My b/f and I placed a disappointing 4th in the tourney, but he gambled afterwards so we were there for about 12 hours.  And I kept looking at the photo hung up on the wall.  And I shamefully admit, I was PROUD!  I smiled a lot and was extremely moved he hung it up so quickly.  :)  Even as I type this, I'm overwhelmed with happiness.  It is SO dang cool!!

At one point in the evening, a drunk guy asked Carl, "Could they have printed it any bigger?" making fun of the enlargement.  I immediately said, "Hey, don't knock!"  And then my boyfriend asked him, "Have you won a National Championship??"

While people may make fun, it's still, to this day, and forever will be, an amazing accomplish for all us women on the team!