As I ventured my way to Reno for the U.S. Bar Table Championships, I was full blown nerves!  Seriously, what the hell was I thinking spending a whole week away from a good paying job to play in a tournament I had no chance in?  Yep, full blown nervousness, unconfidence, and uneasiness.

I wouldn't look at the chart, not the entrants... nothing.  And, I talked to anyone who would listen Sunday night and Monday morning about how nervous I was;  how much pressure I felt; how unconfident I felt in this group of great competitors; how I shark myself in big tournaments over invisible pressure.  That's been my M.O. for years:  I cave in big tournaments.

I was a fumbling mess, really.

My boyfriend thought he was cute on Monday morning, sending me this text:  "You are the only female Texan playing in the tourney. So represent!!!!!"

No pressure or anything, lol.

I received quite a bit of advice from friends and people back home about my nerves, perceived worry, and the pressure I put on myself, as I wondered what I was doing in Reno in this big tourney?  Even several people said to me throughout the week, "You came all the way from Texas?  By yourself?  For the entire week?"  Like it was weird or something.  ;)

I arrived in Reno Sunday night, then hit balls about 8am on Monday morning.  No one was there then, just me and the tables, because the Players Meeting wasn't until noon.  I had been up for hours already and I also wanted to hit balls before the crowds showed up.  My body remained on Texas time the whole week, so I woke up every day between 5-6 am (7-8 am Texas time).

I then returned a few hours later for the Players Meeting and saw the likes of Nicole Keeney and Susan Williams.  I got nervous just realizing they have played so much on the women's pro tour!  What I didn't realize at the time was there were A LOT of Grand Masters and Masters playing in this tournament, whom I didn't know (thank goodness), but it turns out there were a lot of excellent, talented players in this tournament I had never heard of before.  Not just the people I knew, but the semi-local players who may not travel to big tourneys, but in their own states on the West Coast or in Mid West, they are formidable opponents. 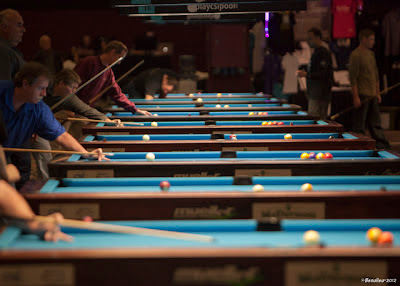 Each tourney started at 4pm for the ladies (while the guys started at 1pm) and play lasted until the evening that day, then play continued the entire next day (10am til early evening) until the finals were set.

I wrote down some notes while laying in bed on Monday morning.  Reminded myself of the tips people were sharing and what I "know for sure" from my past experiences in tournaments.  The list helped reaffirm it was okay to be nervous and to focus on my game.

More importantly - the whole reason I wanted to play in this big event was to get EXPERIENCE.  I was faltering lately in tournaments due to the mental aspects of competing, and WANTED to put myself (back) in tough situations and competition so I could learn/reaffirm.  That was my overarching goal.  Just realizing why I was truly competing in Reno helped me out a lot!

I won my first 3 matches!!  Including a hill-hill match again Stacy Allsup.  I didn't know at the time what a great player she was, so I wasn't nervous against her (lol).  I focused so much on being focused, I found myself on the winner's side on the next day!

Tuesday morning at 10am sharp, I lost to Rebecca Wagner 5-1 (ouch) but she played EXCELLENT safes and ending up winning the 10 ball and 9 ball divisions.  She was the toughest and best opponent I ran into the entire week.

I then had to play Susan Williams.  Playing for 5th.  I wasn't nervous (thankfully), just happy to be able to test my mental game against a great player.  Susan is extremely nice and an extremely good player.  However, she missed a few times and I was able to get some games!  I admit, I played good.  :)  The match went hill-hill and although we both got sharked from the crowd (that's a whole nother blog entry), I won hill hill!  I was then playing for 4th place in the first division!

I played VERY well in the next match again Cindy Silva (who also turned out to be a great player), but towards the end of the match, nerves got to me and I lost because of it.  I wasn't nervous because of my opponent; instead, I didn't focus on the balls in front of me toward the end of the match.  Although I lost THIS match because of that, that learning experience would help me immensely in the 9 ball division.  I missed a some-what easy 9ball to get on the 10ball and should have won 5-3.  Instead, it goes hill hill and I hook myself on the 10ball with only the 9ball left in the final game.  I had a huge opportunity, but my adrenaline was too much for me and I faltered.  BUT, I placed 4th!!

Everyone back home was so proud of me.  And I was proud of myself!  I couldn't believe it!

I received a bye at 4pm.  Again, didn't look at the chart, and Pro Player Melissa Little has now arrived to compete.  The tourneys are getting tougher!  Then 20 minutes before my match, I get a text from CSI and it told me I was to play Nicole Keeney at 530pm.  "Oh well, I figured.  Another test."

But Nicole wasn't playing like I've seen her play before (kinda like Susan Williams) and luck was not on Nicole's side because I made THREE 9 balls on the break against her.  Yikes.  She wasn't happy with me.  I also missed a lot of side pocket shots on these tables so at one point with ball in hand, I get bad shape from the 8 to the 9 b/c I don't want to miss it in the side.  Then of course I miss it b/c I leave myself so badly, lol.  But, she scratches on the tough cut and it's now tied 5-5.   Then it goes 6-6 in a race to 7 and she scratches on a fluke collision of the balls.  I find myself with 5 balls left on the table with ball-in-hand.  My adrenaline is pumping but because I dogged it by jumping up on the final match in 10 ball, I am VERY determined and focused on staying down.  I run out! 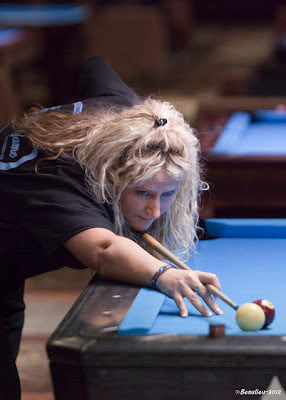 I'm so excited about that win though, I falter the next match against Canadian Andrea Wilson and lose 7-3.  I just ran out of steam.  :(  I had a few chances, but couldn't capitalize, plus she got out very well.  I was bummed to be playing on the one-loss side on Thursday morning for 9th place.

However, I won my 10am match and found myself playing for 7th place!  But, I had some crazy shape problems and just couldn't pull things together.  I lost 7-1 against Beth Fondell (who had placed 2nd in 10 ball) and was simply shocked how weird the match went.  But, I placed 7th!  OMG!!  Second tourney of the week, second time in the money.  And I was testing my mental game SO much!

Oh, how I LOVE the game of 8 ball!  I think I play it best out of all the divisions, so I was pretty happy and confident going into Friday's matches.  :)

I then played a friend of mine and when I was up 2-0, she tells me, "I just can't play well against you."  Whatever.  I then find myself 2-2 and she takes a break. I am playing well, but I got out of line twice in two games and it cost me.  Dearly.  It goes 3-3 in a race to 4 and she breaks and runs to win the match!  I am so freaking sick, I go to my room at 10pm at night and just stay there all night (yes, me, casino, in my room?  I know, doesn't make sense.  But I was upset).  But I was severely deflated.  I HAD that match.  Two missteps and that's all that was needed for me to lose.  Very sad; very deflated; very upset.

I play for 9th place the next day, at 1pm on Friday afternoon  and I am playing SO well again.  However, the first game I miss a bank on an 8ball.  The match goes hill-hill and I foul on one of those close-to-the-cueball shots and she gets out.  I was sick.  I had my chances and AGAIN, just two missteps cost me the entire match.  :(

My opponent was such a good player and I have known her for years via the internet but never met her in person.  She has a GREAT game and I was SO happy for her!  She said she was nervous against me and I thought that was very cute.

I placed 9th.  In the money, but not really all that happy.

Overall, I should be ecstatic!  I really should be.  I conquered fears; tested fears; learned A LOT; had a GREAT vacation; got "in the money" in every division; and had fun!

My overarching goal was to gain knowledge and toughen up my mental game.  I DID that.  I can already tell I am more confident.  I played a weekly tourney Sunday night (the day I returned to town) and placed 4th.  Then played  two straight pool matches the following day and I can tell my mechanics are solid, and I'm more mentally tough.  I can still feel pressure, but I handle it better already.

I honestly feel like a competitor.  I was found out to be a force to be reckoned with.

And this tournament gave me the ammo I needed for myself.  Not just "experience," no.  Not at all.  But instead and more importantly, the confidence gained by knowing I have more experience.

Yes, I am a good player.  I just needed affirmation;  a reminder;  and I got it.

It's not to say I wont be nervous, or have some stumbling blocks...but I will look back on this experience as a tool; part of my arsenal of knowledge.

Everyone already felt I am a tough opponent, but *I* have been my worst enemy because I haven't been competing the last few years like I used to.  I felt like I lost some of my mental toughness skills.  But I didn't - I just needed to work them (like a muscle); muscle memory.

I'm still no pro, nor pro-level, but dammit, I do play good!

Wont mean I will win every match, but it means I have more confidence.  Which *will* help my nerves in the future!  :)

Extremely well written. I felt like I was there watching you. Your insight is piercing; your honesty uplifting. You DID get what you came for ... and you ARE better for it. Contratulations!

People can TELL you all day long that you are a contender, but hearing it is nothing like getting out there, doing it, and knowing it for yourself. Great playing!

fwiw- I knew it about you before i even saw your name on the entry list! : )

Thank you so much for your comments and the nice note!!