As usual, several blog topics magically present themselves when I go to tournaments, lol.  And since for an entire week I was around pool in Reno, I have numerous topics to share!

I wont put them all in one post, as that would just put you to sleep, lol. Even when I shared my Reno Recap, I had SO much I could have added, but the entry was already long as it was.  Instead, I will write about some topics separately.

Let me start with The Heckler story. The guy really wasn't a "heckler" but in my female, irrational, raised emotional state of mind, he will forever be over-exaggerated with that title because of this "situation."

I was playing Susan Williams on the one loss side of the 10 ball division, already a very tough match. We were on table 20, which was right in front, where the bleachers are, so people were in the stands to watch as we fought it out for either finishing in 5th place or moving on to the 4th place match.

At this point, I'm thinking:  Who is that?  My boyfriend isn't here.  So I wonder who that is being sweet?

You be might wondering, "Well, why didn't you just look up and see who said it?"

Well, I was taught by the famous player, Joe Salazar, not to look at the crowd. It's too easy to be distracted by what you think others are thinking, but if you don't "see" anyone in the crowd, you can't be distracted by them, and instead focus on pool easier. I have used this technique successfully numerous times, and esp in big tournaments where the crowds are larger.

Okay, back to the match:

Susan breaks at 3-3 and I hear the same voice say, "Come on Williams."

I didn't let it get to me, tho, as I have learned over the years that people who cheer for my opponent are rooting for them, not rooting against me. It's an extremely valuable learning experience the sooner you learn this concept, btw.

During the next two games, The Heckler moves around a lot for some reason: behind us, to the side of us, to the bleachers, etc., all the while clapping for Susan and saying nice things after her good shots. I just keep focused, because I am playing well and trying to fight hard in this match.

The match goes hill-hill (4-4) but I miss my out (frown), so Susan is running out. But, she misses the 9 ball!  As the 9ball rolls to the end rail, the cueball is about to get hooked behind the 10ball. The Heckler (who is now in the bleachers) says out loud (louder than anything he has ever said up to this point), "Hey look, it's gonna get safe."

I would have been fine with that. It was about to be a safe.

As this point, my clear-thinking, rationale-Melinda, is no where to be found. I'm PISSED at him. This is no longer cheering for Susan, but rooting for a bad roll.

As I walk up to the table I say, "wow" in utter disbelief.

I explain, "No, not at that, at him" as I point my finger loudly, directly at the guy sitting in the bleachers in his white shirt all chummy.

I'm no longer in a match.  I'm now defending my emotions.  I tell The Heckler, "You didn't have to say that. It was already going to get safe, that was obvious."

He defends himself, as I've just called him out in front of the entire crowd, "It wasn't personal."

I snap back, "Then you shouldn't have said it at all."

I kick at the 9ball, hit it, but don't make it. I'm actually surprised I could even kick successfully because I was so upset.

Susan is left with a tough 9ball and then a tougher 10ball. I'm still very content, tho. I played my little heart out and went hill-hill with Susan Williams, didn't let my nerves get to me, and I was about to place 5th! But, the long, straight-in 10ball was missed and I was left was a very make able shot to win the set 5-4, and to move on!

I walked up to the tournament desk to turn in my score sheet, and vented about The Heckler. My adrenaline is rapidly flowing, as I don't like to get upset to the point where I speak up rudely.

As I go grab my things for my next match, he is still in the bleachers and I overhear him say, "I just got in trouble."  He shares his version, which isn't what I just experienced. I wanted to interrupt and tell the person he was talking to, "If you want to hear what really happened just let me know." But, I just walked by and let it be, because I had a match to get to. 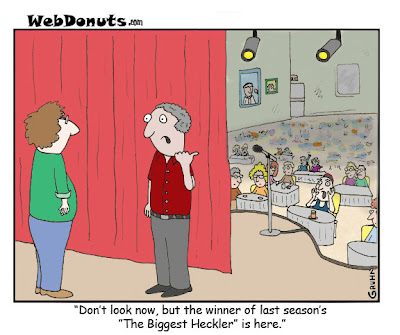 I found out later that The Heckler actually sharked Susan with his cheers.  The whole thing was very unfortunate.

Unlucky for me, I would see him every single day the rest of the week, sometimes several times a day in the tournament room.  I never made eye contact with him and would instead ignore his entire presence and just walk by him like the exchange never happened.  I did not know who this guy was before the week in Reno.  Turns out he's been around pool for a while, but I don't recall seeing him before.

I am not happy I reacted like that in the middle of a match and in the front of people.  But I am human and make mistakes and react to my emotions and feelings in the heat of the battle sometimes.

Personally I think you have two options in a situation like that.. and this has been told to me by a former pro player. You either address the situation, or you ignore it. If you feel it is something that is going to continue to upset you during the match, or occupy your thoughts, you should address it and get over it.

I know that when I watch someone or bet on something whether it is on the side or in the middle I try to aknowledge respect on both sides. I know even if the guy I did not bet on made a good out or good shot to win I let him know it. I think sometimes people do not realize how much of a mental game this really is and they do shark the players with there feedback from the crowd without even knowing it.(I know some do and shark on purpose) I do feel though that what you wrote about Joe Salazar is one of the best pieces of advice I have heard in a while. That is such a great bit of advice that I will use myself. I feel that you handled it well and if it happens next time you will not even let it phase you cause you experienced it already. That is what people cannot practice is experience and learning from these experiences that effect you mentally with this crazy game of pool we all love.

Could you have called a ref over to take care of the situation? I think once you get to the point of having to take care of that sort of business, during a match, you have lost all focus on the match. I am proud of you for maintaining your cool after that....

Rebecca - My emotions were too high not to address it at that point, lol. I like that advice that former Pro gave you.

Juice - I like that you respect both sides; that's unusual nowadays, lol. Thanks for the kudos! I'm afraid I will still react verbally again, tho. But I'm okay with that!

Becky - I didn't mind handling it myself at that point. :)