My boyfriend and I played in another scotch doubles tournament last Saturday. We played very well together - again!  They had a calcutta and my b/f bought the pick of the litter... and then chose us! I was a very proud girlfriend :)  (even thought that's pressure, lol).  We bought ourselves for $65, and my b/f then asks me "did you want to buy half yourself?"  Pecker, lol. 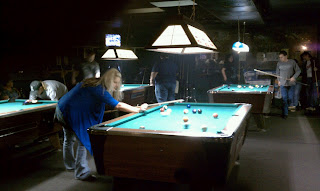 We then entered the 9ball tourney they held, and evidently we play better as a team because he went out in two and I went out in three, lol.  I *almost* got last lady, but I missed late in the rack and thought too much while down on my shots again.

But, another scotch doubles tourney win for our resumes! 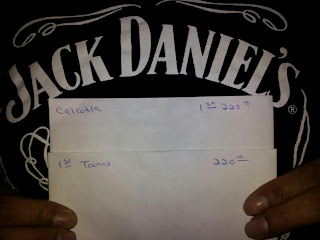 Everyone states how it's tough for couples to play pool/scotch doubles together, but we play really well together (except that only one time).  Otherwise, we have placed 1st, 2nd, 1st, 3rd, 1st and 1st now.

I was reminded just how badly some couples are together when one of our opponents started to mouth off to his female counterpart during the tourney.  I tried to ignore it, but they were arguing so loudly, it was difficult not to.

I am very lucky my b/f and I play so well together.  We both know the game very well, and he knows to fist pump me gently (to console me) if I miss (instead of getting on to me) and we both compliment each other's shots out loud.

He played really good this past Saturday and got us out of a few bad spots.  Whew!  Glad I didn't have to carry him this time - I bet he's heavy. ;)
Posted by Melinda at 8:20 AM