Since I hadn't been on the practice table, I still prepared for the Texas Open by watching my FAV dvd! I swear this player review by Buddy Hall and Grady Matthews truly prepares my game because I get to watch such smart pool, along with the "why's" of the shots. I love it!


I was looking forward to the 37th Annual Texas Open but also a little apprehensive. I had a funny feeling about the weekend, not about my play, but instead about "things," so it was a mix bag of emotions going on.


Quick summary: I drank too much each night, didn't get enough sleep, and yet still managed to play POOL somehow (I honestly don't know how, lol).


On Friday I got an hours-worth of one pocket lessons from Sylver Ochoa. Then we all went to the Men's Player's Meeting which took a long time, but we ended up at another pool room to drink with friends, where I had my first-ever Jager bomb, courtesy of the Fast Eddies Billiards area manager. Uh oh, I liked it! 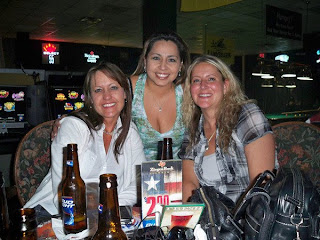 Teresa, Yvette, and I! 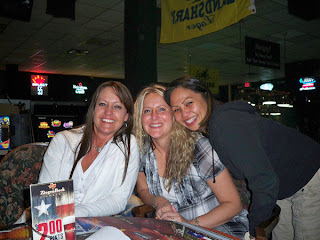 Teresa, and I along with Ming Ng - winner of this tourney!
The men's event had 116 players in it. Charlie Bryant would win his first-ever Texas Open with Gabe Owen coming in second. On the women's side, for the last few years, the top 32 pros were forbidden to play (that's such a wild word to me, "forbidden"). But this year the pros were allowed to play again. So, Vivian Villarreal and Belinda Calhoun showed up to compete with us this year. On Saturday night, after the Women's Players Meeting, I was stoked I got a bye! Only two byes and I got one! However, my excitement was short-lived as I read on the chart that my match was scheduled at 12:30 --> 12:30AM! Eeek! However, looking at the bracket, I had a pretty lucky draw - I was nowhere near Vivian, Belinda, Ming Ng, Jennifer Kraber, Helen Hayes, or Nicole Keeney. They were all battling out against each other in the bottom bracket, lol.


Since I didn't have to play my first match for HOURS, I went to dinner Sat night, then went to another pool room, and even got another two hours of one pocket lessons. I then sat around and had a few drinks. I don't know what I was thinking - it's the dang Texas Open and I'm drinking before my matches? But I had fun hanging out and socializing, and my match was still 4 hours away. But admittedly, I knew I yearned more for a "fun" weekend, not necessarily just a "serious" pool weekend.


After the lessons, Sylver had a pep talk with me and reminded me that the tables at the Texas Open are fast and therefore a smooth, non-forced stroke is best on those tables. 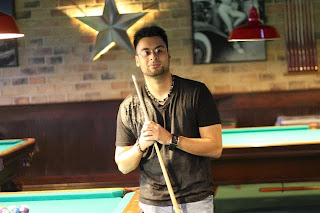 Sylver Ochoa - we tried a photo shoot for him for websites.


My adrenaline was running full force later on that night during my first match, which ended up starting late - at 1am! I was super on edge and wasn't sure how I would get through the match, but I ended up playing SO good! Even with nervous energy and my adrenaline racing through my body, I was staying down and focusing on the outs and I played well! Thank you Buddy and Grady! I won 7-3 I think. At 3-3, I was about to lose momentum because a mistake led her to run out, but she scratched on the 9 ball. Then I just won, won, won with good play.


I was so excited! Afterwards, one of my friends told me, "I'm tired of you acting surprised when you play well. Stop that." Hmm....? I thought that was a very interesting statement, so I am now going to try not to think OR say that out loud to people. :) 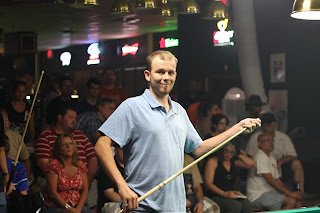 James Davis, Jr. He caught me taking his pic while he was practicing on the stream table!
On Sunday, because I stayed up late again, I decided to hang around in the hotel room and watch tv until almost 5pm to rest up. Even though I was still exhausted even after resting, at least I TRIED to get rest. Everyone was at the pool room, but I knew the smokey atmosphere was not good for me to be hanging around all day until my 830pm match. 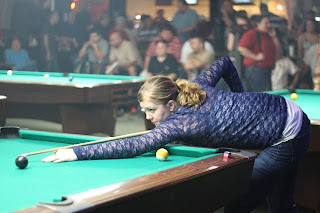 Here is Nicole Keeney - check out that crowd in the background!


I finally arrived and then mingled with friends for a couple of hours before my match. I got another Jager bomb, like I had the previous night during my match, hoping the red bull would help me wake up - I was still SO tired. My 8:30 match was delayed and we didn't start til 915 or 930. Ugh! This is the match I already spoke about (read it here) - I was down 1-5 and came back to win 7-5! Stoked again! I started off stupid, but then played SO well again!


I then sat with peeps and drank some shots with them, as some dear friends opened up about some tough issues they had been going through. 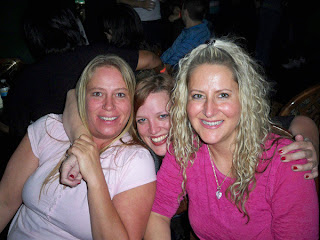 Audra, Helen and I. Good times!
Then we all traveled over to the other pool room, which I never should have gone to, because I ended up having a difficult conversation with someone and lost a friendship. That of course meant more lack of sleep! Ugh.


I wont give specific details, but I want to point out that obviously a lot more goes on at tournaments than just playing pool sometimes. There is more than just the physical aspects of playing pool and focusing on the shot in front of us - sometimes there are trying things on our minds that are taking up mental space, as we try to stroke our cues and pocket balls.


So... Sunday morning comes way too early - even though I had to play at a decent time of 1145am, I of course get up around 730am. :( I get up between 7-8am every day no matter what time I got to sleep the night before. And since I tossed and turned all night, it would lead to a very exhausted Melinda.


Today is now Monday - last day of the tourney. I don't feel tired yet....(during my first match, lol). I'm playing for 5th place and my mind wanders only a few times, luckily. My opponent played good in the beginning but I tied it up pretty well at 3-3 then go up 5-3. I then make a few mistakes and she gets out to tie me 5-5. I can feel a little bit of pressure but still play well. I am running out after her miss on the 4 ball and I see the out, know I'm about to go up 6-5, etc. I stay down well the entire run... until... the dang 8ball. It's sitting in the hole and yet I still whack at it, don't stay down, hit it too hard, no smooth stroke to be found, and I miss it. She is left with two stop shots, lol. In the next game, she misses the 6 ball but I am left with a table-length straight-in shot that I can only stop my cue ball on. No cheating the pocket was available at all. Ugh. I was then left with a tough back cut on the 7 ball, with only the 9ball left on the table. I stand there and laugh and say to myself, "yep, that 8ball I missed is gonna cost me the match." I stay down on the 7ball, but still miss it and again she's left with two stop shots and she wins 7-5. SOOoooo close to the hotseat match! :( 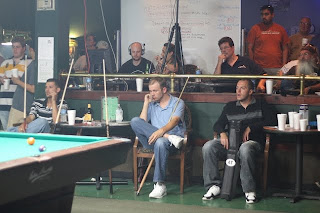 This was the stream table. The equipment, cameras ,and crew are in front of that whiteboard.
I then play my friend Helen and we have a great match in the beginning - we are both playing well and both appreciating each others shots. However, I start to overwhelmingly feel the lack of sleep and I'm getting mentally and physically SUPER exhausted. I tried to bear down and I do okay to tie it 5-5 but I just have no energy whatsoever to keep going. Helen misses a tough 9ball and I'm left with a straight-in, long shot, and I miss it. I am just SO tired, I can't even function. :( It sucks that exhaustion can kill me that way. :(


I placed 5th, though, in the Texas Open! I played really good for most of the event, too! Wow! I know, I know - I'm not suppose to be surprised. lol.


Tourney Description: Unforgettable (for many reasons)
Posted by Melinda at 4:50 PM