I went into the OB Cues Ladies tourney in Arlington, Texas (the very next weekend after the Texas Open) with no reservations, no concerns; I felt confident, not overly confident, not nervous. My numbness, which is so difficult for me to describe, was not in my body this time. Although numbness allows me to play well, for the first time I simply felt confident and secure in my ability. Whether the numbness was there or not didn't matter to me because I didn't need it this time - I knew my fundamentals were steady and I would be okay. 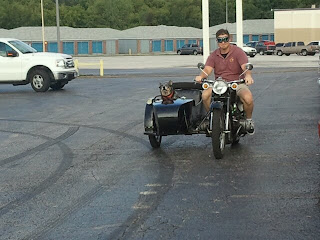 Smokey and Jeff - the most amazing dog (and awesome owner!)

During the players meeting, we all celebrated Orietta Strickland's birthday with cake and flowers. Her boyfriend, Bert Kinister, also brought sandwiches for everyone. Then he announced "and let her win on her birthday." I chuckled to myself, "like she needs help" - she's already a good player!

The matches were called and I get to play the Birthday girl first! I was sad to say, that even before I got to our table I felt bad for her because I was going to beat her on her Birthday. And it happened - I beat her 7-3. She played good in the beginning but I played very well in the middle to put some pressure on her to win.
I then played Tour Points Leader, Jennifer Kraber. I had no worries still - felt confident and secure and went to my match with no butterflies or nervousness about who I was playing. I played good again and won 7-3. WOW! Tough bracket so far for me!
I was hoping to run into a non-champion at some point, but then instead had to play Amanda Lampert next. Ugh. lol. The tough bracket kept coming! She was playing well this tourney, but so was I. We went hill-hill and a sloppy safe on the 3 ball by me let her to the table with an out and she did just that. She got out well and won 7-6. I still felt very good for my play so far all day!
I then waited around for my one-loss side match. Several hours later I played Tracie Volkering and played really well in the beginning and middle enough to win 7-0.

I was guaranteed 7th and still in on Sunday! 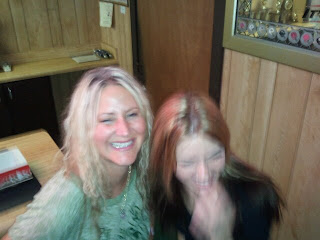 I love fuzzy pictures! Here is Michelle Prince and I laughing it up! :)
I had a few Jager Bombs during my last two matches. I drank those during a couple of matches during the Texas Open too and hoped that the red bull would wake me up a little as I did get a little sleepy late in the day. I have noticed that my walking 2-3 times a week is really helping my endurance though! I have noticed this since the August stops.
I stayed at the pool room to watch my roomie-for-the-weekend, Rebecca, win her final match to make it to Sunday for the first time! I was so proud of her. We then hung around with friends until almost midnight and decided we should prolly go home to get some shut eye, lol. 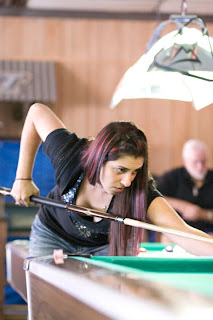 Roomie Rebecca!
I woke up around 3am and tossed and turned all morning. Too much on my mind from recent events that kept my mind thinking. :( Nothing related to this tourney, but we all still have things going on away from the pool table, huh?
I felt pretty good though as I stopped by Taco Cabana to get Rebecca and I some potato and egg tacos. Yum! I got to the pool room AT 1030, match time.
I ate my tacos on the way, so all I had to do was wash my hands and pull out my Jim Buss cues to get started. My opponent? Orietta Strickland. Yes, again.

I played good again/still and even though its been tough for me to win my first match on Sundays, I beat her 7-5. My solid fundamentals are really working for me (yay!). In addition - no nervousness, just playing good pool, seeing the runnouts, staying down, and smooth stroke. :) 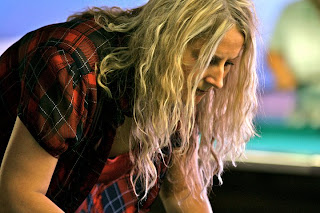 Me, workin' hard but lovin' it!
I then had to Michelle Ram. She usually beats me, but today I felt that would not happen. Sure enough, I played good again...but I fully admit she got every bad roll that could happen. :( I tried to not feel bad and instead just kept plugging along. I could have won 7-0, but I got something on my contact and didn't focus too well the last couple of games but then all the smudging finally dislodged whatever it was and I won 7-2.

The awesome Heather Puflord was visiting us from California and I had to play her next. We both played well against each other and had a fun, smart match but I lost 7-5. I wont forget the dang 8ball I missed, thinking too much about shape, to go up 4-3. :( But, I played well again! 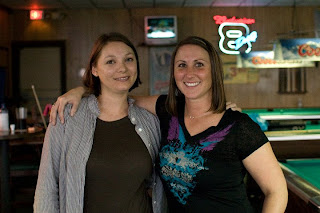 Heather Pulford (2nd) and Winner, Amanda Lampert! Amanda played good all weekend to win the title!
I placed 4th with the toughest draw! And I played well every single match!! I didn't mind the draw at all - during the Texas Open I had the easiest draw in the world, so it didn't bother me I had a tough draw this tourney.

Tourney Description: Pleased!! (as punch!)
Posted by Melinda at 3:57 PM

aww I got an honorable mention... hehe