Last night, Ashley and I met up at pool room because we needed to shoot a video for a website project we are working on, and also because she wanted to play in the weekly tourney.  But the 32-man field filled up in ten minutes, and she wasn't one of the 32 in line. :( But, we took advantage of the free time and decided to spar.

Ashley loves the word spar, she confided:  "Makes me feel like we had a medieval duel...." YES - she really does need a blog!  Her clever word choices always make me smile.  :)

Back on topic....I normally practice alone and she for-sure normally doesn't practice with a chick, so this was kinda new to both of us.  lol.

We played ten ball, because that's what I play when I practice. :) She didn't seem to mind, luckily.

I won the first game and then asked my good friend Steve for some pennies.  She looked at me funny and I said, "You're racing to nine in your tourney, right?

"Then let's play like it's a match and keep score."

I normally wouldn't have played, but I really wanted to practice for two main reasons.

One:  I wanted her to get some practice time in because she would be playing in the WPBA Pro tourney in Atlanta in just two days.  This was a nine foot table, too, and I knew she could use the time on that size of table because her "home" pool room only has 8 foots.

Two:  I had been playing REALLY well since July, but my last two sessions on the pool table (which happened to be straight pool matches) didn't indicate to me that I was still playing well, so I was concerned.  In one, my excuse was I was tired.  In the other, I didn't get to see if my fundamentals were still strong because the guy got me tipsy.  So, I wanted to see if my good play of the last few months was a fluke or still a notch up.  I figured this spar would help me figure that all out. 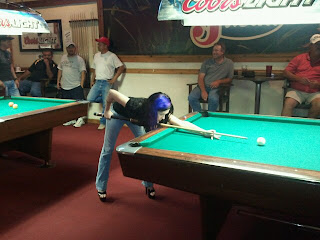 Long story short, we played for 4 hours.  Race to 9.  She won the first set 9-6, I won the second set 9-7.  We both played good!  We were neck in neck most of the time, too.  She had many brilliant outs and I would sometimes shark myself with my own good play, lol.  Lots of bar flies were watching - some we knew, some we didn't - so it was cool to play under that atmosphere of people standing around watching - it toughens up the skin.  I few times I had to bear down and refocus and I was happy I was able to do that successfully.  That is what helped me win the second set - realizing I wasn't playing my best and refocusing my mind to play better.  My mental toughness is strong lately, too, not just my fundamentals.

After the two sets, I figured out I do still have some talented fundamentals left in me after all (whew).

Ashley is on her way to Atlanta - have fun and enjoy your pool journey, Ashley!
Posted by Melinda at 3:03 PM

Email ThisBlogThis!Share to TwitterShare to FacebookShare to Pinterest
Labels: Practice

seems like ms. n uses a death grip. is that good?

also, i'd love to hear a pirate say the word "sparrrrrrrrggggghhhhhhed"!! :P