This tournament was very surreal for me. Showing up for the first time as not a Board Member was freaking me out a little bit, but more so, because I hadn't played in the last event, I REALLY wanted to last until Sunday for the points - to make up for missing the Tulsa event and to keep me in the top ten in the rankings on the OB Cues Ladies Tour.

I could tell the night before I was nervous. I could tell driving down the morning of I was nervous. If I am numb with no worries, I play best. So, I was worried about my expectations before I even walked in the door (not a good sign) - I knew I needed to focus on my routine and mechanics, but I knew that with what was going in my mind was more on "wanting" to last until Sunday than remaining calm.... so it was not good.

As I walked in, many friends asked about my Mom, a few didn't know I wasn't a board member anymore, and then they called me for my match right after the player's meeting. I swear they announced I was to play Lisa Marr first - front runner in the points- but instead it turned out to be Lisa Henderson-Major. Either Lisa is tough, though!

I felt good going into the match. I was also playing super smart - my safes were good, I could see position very well, and I was kicking good. But, I wasn't making all my balls. :( I gave away two games because I missed a 7 and 8. I was not happy. I stayed into the match though and it was 3-5 her. At one point I thought her miscue should have been a foul (I thought she pushed b/c of the miscue) and tried my best not to let it upset me, but I admit throughout that game it did - especially since she almost three fouled me. :( She was up 4-6 but I did get to game 5. I wanted it so badly to go hill-hill but she got bad on the 6 ball but used it to carom the 9ball in and it was over. I was super disgusted and hated that I played so badly!

I then had to play Monica Anderson and we talked throughout our whole match and caught up on the last few weeks, hehe. I missed two 9balls and an 8 ball and she had one really nice break and run! She was up 4-6 and I told myself, "well, you'll just drive back home after this." But, I was able to win the next two games to tie it hill-hill. I then made three balls on the break in the final game and ran out for the win. When you break and run on this tour, you get a scratch off lottery ticket so Monica and I were both thrilled we each got one that match. :)

So, I wasn't going home just yet. 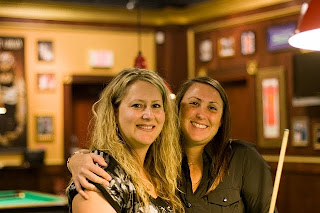 Myself and eventual winner of this tourney, Amanda. Congrat's!
Amanda told me while we waited for our next matches that she won her first match 7-5 against Kim Sanders and added that Kim was playing very well. I then found out that's who I played next. So, I went in knowing Kim was playing well but ready to focus on my game. Sure enough - she was playing good! It was nice to see the improvement in her game! It was tied 2-2 but then I played really well to win the next two games. I was playing real good safes this match! Playing smart - seeing shots and patterns and position quite well. I attribute that to all the straight pool I had been watching online all week. :) It felt great.

Then I started to feel a little elated and was aware people were watching and I started to make mistakes that let her back into the game. She was frustrated at 4-2, but not anymore - she capitalized on my mistakes and all of a sudden she is up 6-4. Wow! I peeled my way back and surprisingly tie it hill-hill and after a few innings at the table, I get out to win in the last game. Wow! Another 7-6 win!

I then right away play Orietta Strickland. She has the ability to best anyone and used to, but now it seems sometimes her speed gets in her way and she misses. Case in point - the first game she runs out fast but beautifully, but then missed the 8 ball. She would only make three more mistakes the entire match. She was running out from everywhere and I didn't have many chances this time against her. She won 3-7. I placed 17th outta 45, got $20, and didn't last until Sunday. :( And because of my crappy finish, two people passed me up and I am no longer in the top ten of the rankings after this stop. :(

I drove back home with no emotion and was very tired. Turns out, I was not just tired, I was exhausted! I got to bed by 930pm and slept in late - guess my sad play was also due to not getting enough sleep for the tourney (even tho I tried all week to get sleep for this very reason).

Some advice posted on the forums described well what happened (even tho I read it BEFORE this tourney) - what got me, obviously, was expectations and not focusing on my fundamentals. I realize now I wasn't even looking at the object ball last. As many can figure out what that means - I still don't have my fundamentals and pre shot routine down. Routinely practicing by myself once a week to work on my fundamentals and pre shot routine has helped in the past with conditioning, but I hadn't had the opportunity to practice alone like that in 6 weeks.

I am to play in the Texas Open next weekend. I should be quite scared now how I will play/do. But, I will set a goal - something I did NOT do this weekend. Ugh. A little late for quarterbacking, huh?

I kinda just showed up and hoped for the best I guess (eeek!) for this tourney. It worked at my previous tournament but that tourney had no inside, invisible pressure for me to do well for points like for this tourney. At this tournament, I admit I sometimes did try to enjoy the awesome feeling of staying down, but I wasn't successful because I didn't stay down on my shots, lol.

Don't get too down on yourself. We all go through rough times, on and off the table. It sounds like you've got a lot on your plate right now, and it's natural for that to pull your focus from your game.

Keep your chin up. As my mother says, "This too shall pass."

PS - Where is the Texas Open?

Thank you, Jeff, for the words of encouragement.

The Texas Open is Labor Day weekend in Round Rock, Texas at G Cue Billiards. :)

I had a disenheartening experience too this past weekend... Dalton and I have both been playing well these past couple weeks. Thursday at league I missed the last ball on two break and runs and a rack and run.. but finally got my break and run on my last rack. Saturday we went to a good tournament with a calcutta and I took the player that eventually got 2nd hill hill... then Sunday we played in a Scotch doubles tourny together and played so poorly... it really disappointed me.. I felt like someone popped my balloon I have been riding on for a week now... all part of the game.