My first match of the BCAPL singles event in Vegas in May of this year (2009) was a very memorable one to say the least.

Flashback to the year before I became a Master player (2001). I remember very distinctly watching this nice, kinda-short lady, with big-kinda hair, play matches around me as her and I moved along through the brackets. Why was she so memorable? Because she would high five her friends after every game she won. When she would win a match, her and her friends would hoop and holler, along with the high-fives. She would also literally scream and jump up and down after a match win! Well, eventually, we had to play each other that year and it was brutal. I so wanted to curtail her fans but alas, I lost that match to her, as she continued her excitement and jumped up and down and screamed and yelled with her friends after the final 8ball sank in her favor. Eventually, she finally realized she hadn't shook my hand and came over to me and we shook hands. I followed her progress on the charts and she did real good that year and became a Master player.

Fast forward to May 2009, the Riviera, open women's singles event, 4pm Match on a Saturday evening. I walk up to my table and there she is - the screamer! I looked at her and said, "weren't you a master player?" and she replied, "yes, I was." Obviously, she didn't remember me from Adam, but boy did I remember her. Evidently though, we were both in the same position - we both got "in the money" the first few years in the Masters but then didn't get in the money two years in a row and that allows one to move back "down" into the Open division.

This year, she still beat me (well, I beat myself) but she didn't scream (thank fully, whew!). I hooked myself by accident three times and scratched on a stupid shot and if I was playing even slightly better, I would have won. After the match she shook my hand and said, "you play so much better." Well, "THANKS" I thought to myself not saying a word out loud in response (I know better after many years of trials and tribulations, lol).

However, the most memorable part of the match was she wouldn't set the chalk on the glorious Diamond table right side up. ARGH! She kept putting the chalk upside down; every time. So, when it was my turn at the table, I would grab the chalk and use it, then put it back down right side up. Thinking to myself, "wtf." I couldn't believe it. Who really does that after playing pool for so many years? Was she that distracted? I don't recall it 8 years ago, but maybe she did it back then and just I didn't notice. There was more than one piece of chalk on the table so as I walked around, I would turn over that other piece of chalk and put it right side up as I surveyed my shot. 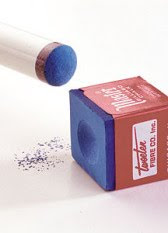 Do I think this distracted me from my play? NO. Do I think this is a little rude. YES. As I searched online for a photo of an upside piece of chalk, turns out many other people have complained about this very thing. It is listed in many pool etiquette blogs, posts, and instructions. Guess I'm not the only one who thinks this is annoying.

Links I found about upside down chalk:

Here is another link:
http://www.billiardcoach.com/home/2009/04/26/three-strikes-to-avoid-for-better-billiards

And here's something else you may appreciate:
http://billiardcoach.com/forums/viewtopic.php?f=4&t=271

Those are GREAT links! Thank you for sharing. :)

I find this annoying as well... Along with people that use enough hand powder to powder the whole pool rooms hands... ANNOYING.. it gets on your clothes.. it gets EVERYWHERE... nothing more annoying than getting to a pool table that is streaked with white baby powder and handprints EVERYWHERE!!!