The third installment of the OB Cues Ladies Tour was held in Dallas at The Billiard Den - about 50 minutes from my house. It's always so nice to be close like that. :)

We had 56 women enter the tournament and we were all so pleased with another great turn out!

I got a bye then played a player who is working very hard on her game trying to attend many stops. I was completely distracted and playing VERY bad. I was too worried about what people around me were thinking, too worried about the waitress smoking in the area, and then I had to ask a spectator to leave the area (and we had words) and that can sometimes affect one's game. So, I let things get to me I don't have control over and I was very disappointed in myself for letting all these outside influences into my head. My opponent played well but missed 3 crucial 9 balls but I won 7-4. 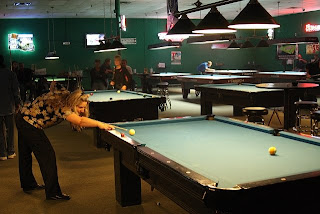 Me, practicing.
I walked back to the tournament chart to run the chart and I recognized if I didn't shape up, I'd lose my next match.

My next match was against my good friend Rebecca Riley. She and I talk about the mental game a lot and she has seen me play in two finals of tournaments and has been with me during those emotional times - so we have a connection not many friends have. I knew she would be tough to play because she has been working on her game and I had been struggling all morning. I started off very shaky and wasn't playing well. She won a few games and so did I. She jumped REALLY well and hit EVERY ball and made most of her jump shots. It was quite impressive, but I didn't let her know how proud of her I was during the match with those shots. I could have snapped my fingers in approvement, but instead I was trying so hard to focus on my game that I didn't snap or talk much. 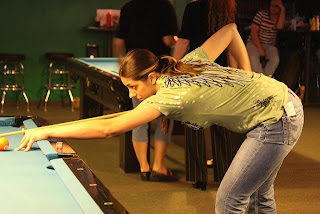 Rebecca - I swear that's a lotto ticket in her pocket!
After a few misses, I told myself to focus on my shot routine and my fundamentals and not even think about a friend that had shown up to watch me play - he sat right in front of my table. I started to finally play well and got out nicely a few games. I won 7-4 I think. I felt good I was able to finally start playing in the middle of the match and pull off the tough win. 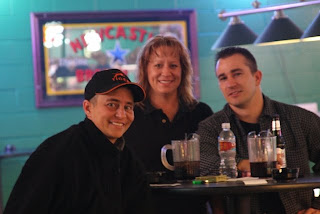 Good Friends (and teammates!) - Amy, Christy and Best Supporter
I then played Tara Williams next - we had to wait many hours before we finally played. It was a really weird match. I scratched on a 7, so did she. She missed a 9ball, I missed an 8ball. Weird things kept happening - awkward scratches by both of us or missed shots that she normally doesn't miss. At 4-4, I missed an 8 ball or scratched and said, "I'm making this easy on you." I was pretty hacked off at myself! I apologized after she ran out and told her I was just mad at myself and she said, "oh, I know what you mean," The next game, she missed a 9ball and I won that game and it was tied 4-4 or 5-5. I decided to stop being ticked off at my mistakes and enjoy the rest of the match and I was no longer upset. I was proud of myself for reversing the frustration in my head and body - but the match only went hill - hill b/c we were both struggling. At 6-6, she was running out and missed the 5ball. I could BARELY see it as it was snuggled behind the 9ball, but could just enough to cut it in. I figured I could slide up to get shape on the 7 ball, but instead, the cueball slipped off the 9ball and scratched in the side. I was PISSED! OMG, I was pissed. LOL. I think I said something out loud, but not sure what it was ("no", or "ugh", not sure). She ran out. Hill-hill. Tough loss. A friend who came to the tourney to watch me play came up to me RIGHT afterwards. He said, "bummer" and I said, "ya know, anything you say right now will tick me off, so please don't say anything else. Bummer?" I walked off (oops), after giving a quick, wtf hug. Eeek.

It took me a while to get over that loss, while sitting at the tournament charts acting like I was okay. I finally went up to Tara and told her that it was still a good match and I was glad I got to play it with her, and she agreed we both made mistakes. 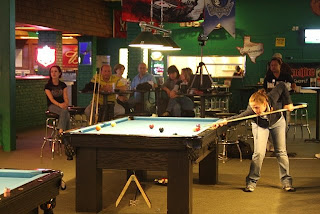 Tara Williams, playing in front of the Live Stream
I was in the tourney still on Sunday morning, though! I was happy for that. I played Lisa Henderson-Major on Sunday morning and it was another interesting match for me. I was down 3-2 when she missed an 8 ball. I made it nicely and then a 9 on the break and another game and next thing you know I am up 5-3! I was playing SO well - but I recognized in my head I was playing really well, instead of playing pool. I tried a tricky shot - only because I was playing (now) too confident. I scratched. She started to come back and she even got on the hill first. I then got on the hill with her. I surveyed the table and saw a potential 5-9 combo at 6-6 and was not overly confident but sure of myself. I shoot the 1-ball well and slide over for perfect shape on the 2ball.... except.... it rolled a third of an inch too far and I got titty hooked! OMG! I couldn't believe it! My only option (cuz I couldn't kick at it successfully) was to move the 9ball out of the pocket so at least she didn't have an easy combo.

She softly grabbed the cue ball. Made the 2 and 3 and got tough on the 4ball. She slid over nicely for a 6-8 combo and hit it very good to leave shape on the 6 ball. She then had to play a tough shot and come across the table for shape on the 9ball and she hit it perfectly for perfect shape. She got out very nicely hill-hill. I placed 9th. :( 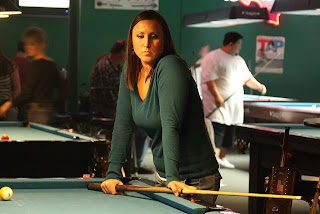 Amanda Lampert, surveying her options.
I then went over to the live streaming and watched Tara and Amanda play a brutal/tough hill-hill match where Tara came out on top. Amanda then lost to Lisa Mara - Lisa was down 4-2 and won 7-5. Amanda and Terry Petrosino placed 5th, Lisa Marr 4th. Lisa Henderson-Major went on to place 3rd- her highest finish yet! And another friend, Ashely, placed 2nd - her highest finish yet! Congrat's to both! And, congrat's to Tara for winning the tourney. :) 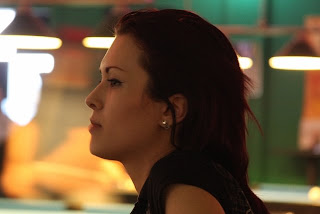 Ashley Nandrasy, 2nd place!
Here are all the photos and the article.

Haha.. I had been working on my game and then with going to the gym I pretty much stopped practicing..not good.. I was glad to see you play well even though I wanted to win.. and that is a scratch off ticket in my pocket from my 9 on the break in my first match.. it's still in my wallet.. lol