I didn't know how this stop would go. I haven't been practicing because I have not had energy - been depressed so not sleeping, and driving an hour to league and back once a week was taking it's toll on me. I knew placing 5th at the last stop would be at the back of my mind, too.

We had 55 players and we played at Fast Eddie's in Austin at the end of Feb. The OB Cues Ladies Tour was having another great event!

I got a bye then played a new girl. I was playing on the front tables and one of my friends from Austin was there - he is someone who I feel probably the most comfortable in front on. He's never judged my game, my shot selection, or made comments - he's always been the up-most supportive. While I didn't take advantage of all my opportunities, I was playing well when I was at the table. I was staying down so beautifully - my body FELT so good. Afterwards, he said I was playing well and I told him I was working on staying down and he said he noticed. That made my day! 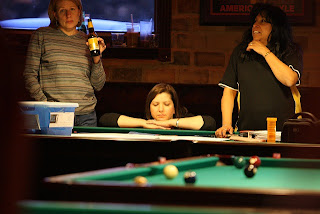 My dear friends, Julie, Tracie and Monica
The night before I drove in by myself and got a room at the hotel behind the pool room. It was awesome to be that close, but I stayed up too late talking to friends and didn't get much sleep. That would prove to hurt me badly Saturday.

I then played Tara Williams next, also on the front table. I was playing well but over hit a 7ball and missed a 6ball and a 1ball - all which led to a hill-hill match. At 6-6, I played a safe and found myself at the table, after she was able to nicely hit the 1ball. I saw I could get out - no problem areas, except one - getting to the 4ball could possibly leave me a hook behind the 5ball. I hit 1, 2, and 3 well, but sure enough I hooked myself behind the 5ball. I thought I would come out more but did not. I was able to hit the 4, but Tara ran out to win the match. Afterwards she said to me, "you are playing so good, Melinda. You are playing so much better than the last couple of years. I didn't even see some of the safes you were playing; I just knew you were gonna get out that last game." I didn't know what to say except, "thanks - I thought I might hook myself on the 5ball."

It meant a lot what Tara said - it's nice when others state when they recognize improvements of our game.

I then played a really, really nice new girl who was a joy to play. She was funny and personable and played very well for only playing a year or so. I won 7-4. I then had to play Lisa Henderson-Major next. It was getting really late and we were one of the last matches. I was SO tired and could not focus long enough to run out. I missed many, many shots and she plays too good to do that against her. I think I lost 7-3 or 7-4. I asked Lisa Marr if she saw anything I was doing and she didn't see anything - I was still staying down, so I can only attribute it to being so tired. We packed up the tournament things and while everyone else when to eat, I stayed back to drink with friends. I closed the pool room down, along with the Manager (who is really funny) and my friends and then went to my walking-distance hotel. 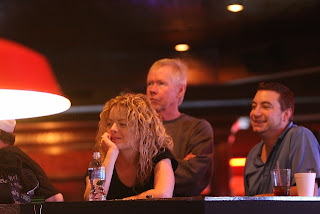 My drinking buddies, the next day.
Of course, the next day, I don't even play in the second chance tournament and instead licked my hangover with food and resting. LOL.

I did take more photos and used a friends lens, which I love! I need to get me one of those. 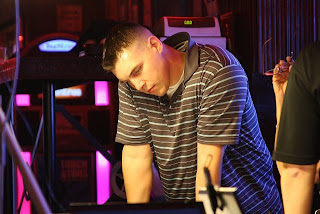 Josh, in front of the Live Stream (he lent me his awesome camera lens)
I placed 13th-16th, didn't make it to Sunday. I already know sleep is so KEY to playing well, but I did not do that on Friday night. I hadn't been sleeping the week before, but still...... I think my last match late Saturday night would have had a different outcome if I had gotten much needed sleep I already needed Friday night.

Tourney Description: Enjoyed but Tired
Posted by Melinda at 7:22 PM