What a Break Contest!

At the pool room where I practice, Rusty's Billiards in Fort Worth, Texas, they have this break contest with their Monday and Tuesday night tournaments. I never, honestly, gave it much thought, until I was practicing on an abnormal-for-Melinda-playing-on-a-Tuesday-night on July 22nd. I'm hitting balls on the 9-foot table by myself with my ipod on, minding my own business, when all of a sudden I realize the place is packed and all these people I hadn't seen in a while, much less seen play in the weekly tournament, are milling around. 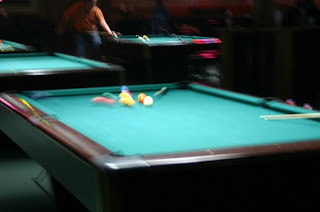 Someone comes up to me to say hi (he's not intimidated by my ipod) ;) and I ask him, "what are you doing here? I didn't know you played in this tournament?" He then explains that the break contest is high enough to bring him out to play because he has a chance to win a lot of money. (Ironically, he's the one called that night to break, but doesn't make a ball on the break! Wow - so close!).

I was so intrigued (people keep talking about, players from Dallas are showing up, and the tournament filled by 6pm this past Tuesday [ it doesn't start until 8pm! ]), so I decided to look into all the nitty gritty details and get the scoop on every angle of this contest everyone keeps talking about. Here it goes:

The break and run pot for August 5th is a record-breaking $3,122!!! That's BEFORE ticket sells on Tuesday! I heard one crazy rumor that almost $500 was bought in raffle tickets just recently by the tournament players on a Tuesday night! Yep, many, many players want extra chances to get their little red raffle ticket picked!

The tournament is filling up so fast, there are now new rules to enter - sign up begins at 5pm on Tuesday and you have to be there with money in-hand, no call-ins are accepted any longer. This past Tuesday, 32 players entered, 16 were on the waiting list!

Also, Tracie Voelkering, the manager at Rusty's, says that they always add $50 to the break and run pot when/if it gets busted.

That one night, as I said above, my friend didn't make a ball on the break. This week, another friend made a ball on the break, but couldn't see the 1ball (tho try as he might, he sure made a valiant attempt at kicking it in!). So, the pot carried over again. I am gonna try and play this coming up Tuesday. I think I might be too nervous and would miscue on the break, if they happen to pull my name, LOL!
Posted by Melinda at 5:19 PM