I went to this tournament to test my mental game. That's honestly the only reason why I went. I didn't plan on winning matches, just going to get more experience under my belt and testing my mental game at the same time.

I practiced for many hours on the tables Friday night with Mike, Amanda, and Mike. Eric and Michelle were also there. I felt comfortable - I got a bad headache, but some Aleve mad it go away and I was able to practice well again that night. I felt good.

They called the matches Saturday afternoon and low and behold I have to play my friend, the top pick, and last years' winner, Amanda Lampert. AND, they put us on the front table in front of everyone! 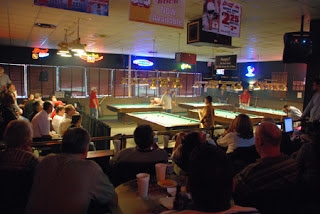 Here is what that front table looks like, in front of the crowd.
I didn't have any expectations. I just walked to the table, made sure I scuffed my tip, got some water, asked the guy next to me to move (he was too close for my comfort during a match - okay, I asked Lewis to ask him to move). I popped a Claritin and off I went. I was down 0-2 right off - missed in the middle of the rack and she got out. I wasn't nervous, I wasn't thinking about the crowd, I was trying not to think about the missed shots, I was just 'there.' I felt okay, but was losing. It's been over a month since the tournament, but I believe I was down 3-0 or something and when I got on the board, I was SO happy- I wasn't gonna get skunked! I was running out one rack and felt real good, but scratched on the 8 ball - someone walking by caught my eye and I couldn't stand up in time to readdress the shot. So, that was one game that was crucial. I was feeling pretty good, and actually playing pretty good (I thought). Then she started making some mistakes and I capitalized and I was all of a sudden up 5-4. 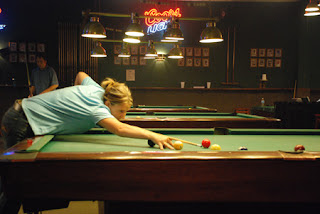 Here I am, playing Amanda.
For me to get on 5 first was key, but she recovered from her mistake and got out well to tie it at 5 and then got out again to get on the hill first (after a nice safety). She was running out well and I figured it was over but she hooked herself between the 9 and 7 and jumped it, hit it, but the cueball went off the table. I got ball in hand and got out. Hill-hill. The next game she makes a nice bank on the 5 ball and makes it, but down the road in that rack, she over cuts the 7 ball and misses. I can barely see the 7 ball and study it for a long time. I decide to hit above the pocket to make it so I don't hit the 8 ball (hopefully) and then I go for it and I didn't hit the 8 first (whew). I make it and then completely, ONLY and purposefully, focus on making the 8 ball so I don't miss the cut shot. I make it and the 9 for the win! OMG! 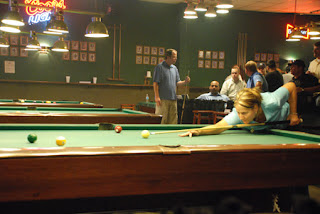 Another shot of me.
I then play Courtney Peters next. Her game has really improved, but she would miss late or in the middle of the rack an I would capitalize. I played some nice safeties, but also missed in the middle or late of the rack, but I capitalized more. I won 7-3. Wow - won my first two matches in the Texas Open!

Here are the brackets.

So, that night I updated the brackets for the men's side and watched some matches and just enjoyed the evening.

The next day, I play only one match. I play against Alicia Teskey, a good player, not one to take for granted, that's for sure. We both made lots of mistakes, though, and we each capitalized on them. I don't remember everything now (too long ago), but I was struggling so badly and so was she. One game toward the middle of the set, I had to play tough position on the 7 and got straight in on the 8, which would leave me a tough cut on the 9. I just accepted the tough shot - made the 8 and nailed the 9. Tied at 5-5, I caught an amazing gear and won the next two games and won 7-5. Maybe it was the tough out of that game that helped my confidence? I made a GREAT safety shot on the 6 ball to get ball in hand on the final game and got out. I have practiced those shots for many years, so was glad I executed it well.

I then played Kyu Yi for the hot seat on Monday morning. I played so bad. She got the first two games with a 2-9 combo and a 1-9 combo (due to my mistakes), and although I didn't let that get to me, I wasn't focused on playing pool. I am SO disappointed. I had a chance to get on the board after she missed an 8, but didn't draw back enough and missed a tough cut on the 9ball. I was struggling and struggling, and even though I would have chances, I wasn't playing pool and couldn't capitalize. I finally started playing, but it was too late. I got out and was only down 6-4 when a tricky shot came up. I knew if I combo-ed the shot I would be left with a touch shot, but didn't have a safety. I went for the shot and shot it soft to leave me a chance to play safe, but she played a better safe back, got ball in hand and got out for the win 7-4.

I then played Julia Rapp. She missed the 9 ball in the first rack and left me a very tough 9 ball shot and I nailed it! She then left me another 9, much easier. Then I broke and ran and was up 3-0. Broke and ran! But, the other games I won until I got on the hill - the next 4 games, were all won because she missed the 9 ball. Wow! Some matches go like that. She made a few outs and the score was 6-5 me when we both struggled to finally finish the next game; lots of misses on the 7 and 8 and then I finally made the 8 and 9 (somehow) to miraculously win 7-5.

I then play Cristina De La Garza next and she was at work. They called her and instead of forfeiting, she was able to come back and play. Even though we started later than we should have, we were still able to play.

I was playing bad at first, again not playing pool. I missed a 9 ball and thought to myself, "I hope this doesn't come back to bite me." I was down most of the time and then caught a gear and started to finally play pool and even got ahead 5-3 I think? She came back though and next thing I know we are both on the hill. I had a tough kick on the 2 ball and missed it and she got ball in hand. I had a feeling she would get out of line somewhere along the run, but she was in line for all the balls - except the 9 ball! She studied it and decided to bank it. She missed! But, it banked into the other side. Someone in the crowd clapped and yelled and it made me embarrassed, but Shayla snapped at them for me. Cristina was suppose to hit the shot hard, and if I wouldn't have missed that 9 ball much earlier, it wouldn't have got to that point. I placed 4th and won $175.

Not too bad for wanting to test my mental game! But, disappointed I didn't play pool on Monday.

I am VERY excited for my friends Jennifer who placed 2nd and Kyu who placed 1st! Congrat's!
Posted by Melinda at 10:23 AM