45 women show up to The Billiard Den - our first time there. I really liked the place! The whole atmosphere is awesome, large room, and good food to boot. :)

Tony is running the tournament charts for us on Saturday and with only 12 tables to play on, it takes a while to get through the matches and the day gets long and Tony hears a lot of complaints.

Here are the brackets.

I played the adorable and friendly Amy Hall first. She has improved and has me down 2-0. Yikes. I find out the tables are a little fast but get to practice a lot of safeties I had been working on and was pleased. I finally win 7-3 and felt comfortable after the rough start.

I then played Helen Hayes next. OMG - I was playing lights out! I mean it - I was playing SO good. I felt good, she was missing early and I'd get out, and was feeling so great. When I was up 6-2, I was looking off to the right and not thinking about the game when she shot a shot after her break. She acted so upset after the shot, I just thought she missed and so I picked up the cueball. But, as soon as I did, I realized she must have rolled out. I asked her and she said yes, but I never heard her. I said it was her shot - I touched the cueball. I should have asked if she rolled out, but I simply picked up the cueball because of the way she reacted after she shot (like she was upset she didn't make the 9ball). I just wasn't thinking clear... -but she should have made sure I acknowledged the roll out... I didn't even hear her, but I wasn't paying attention anyway.

So, I give her ball in hand, she makes the 1-9 and she is down only 6-3. I probably thought since I was up so far, it shouldn't make a difference anyway. Well, she ended up coming back and she beat me 6-7. She was shooting better and I think I felt a little more pressure when she got on 5 and I missed some key shots and safeties. She just didn't miss anymore and got out.

I was kind of shocked - what happened? Wow - I was playing SO good, too. But, she started to outplay me.

I then had to play Bonita Bates and won 7-2. Then played well against Snowy Belt and won 7-2. I then had to play Michelle Ram and it was later in the afternoon and I was all of a sudden VERY exhausted. I couldn't make more than 4 balls at a time and was struggling so badly because I was so tired. She was checking my racks (why, I don't know) and playing a little slow, but deliberate. I lost 7-5 and was just SICK. I was in a bad mood already from being exhausted, from Hunter Tour things, from my parents, etc. It was just too much in my brain and I was in a such a sour mood - I hated to be in that mood. It wasn't pretty and I was just disgusted with my loss - why was I so exhausted?

I decided at the VERY last minute to go back on Sunday. I was glad I did - I saw Shayla get 4th in the main event! I was so proud of her. 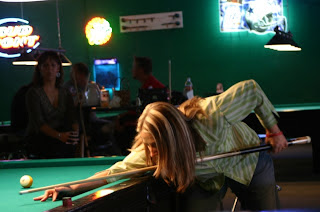 Me on Sunday, playing Kim Pierce
I don't know if I can remember all my matches in the second chance tournament, but let me try:

Won 4-2 against Sandra Adams.
Lost 3-4 against Kim Pierce - played good, but got out of line some (but drew the ball several times!)
Won 3-1 against Michelle Ram
Won 3-1 against Terry Petrosino
Won 3-2 against Susan Petty
Lost 3-1 against Jillian Valles (I played badly)