This was one of the tournaments I help run, and we were also going to be having a charity benefit. I knew going into the weekend it could be a very long weekend and then I had plans to go to San Antonio to see my lovely Mom for a few days (before I have to be away from her for three weeks).

I met up with Julie Friday night and had dinner at Bob's Steak and Chop House in downtown Houston. It was delicious. I had a T-bone steak and two large (very delicious) fried shrimp. The bread was awesome and the steak tomatoes were perfect with their balsamic vinegarate.

I run the Player's Meeting for Monica and try and not make it go long, but at the same time make it funny. The board was dissapointed only 36 players showed up, but everyone sure had a blast! Houston usually gets more ladies, too. :(

I was called to play in the first round and didn't get to hit any balls before my match, but I felt confident anyway. I had to play Kim Pierce first and ran out nice the first game and felt pretty good. Then I missed a 9 ball, because I was thinking while down on the 8 ball, in addition to not taking two seconds to peek around the table to see the line for the 9ball. I got out of line and missed it. She gets out again after I miss an 8 (I think) and I'm consciously telling myself to not think about the missed 9 ball and to move on. She wins the next game and then I start to play well and get out very nicely on many games. I get out of line a few times, but I am playing well and really seeing the layouts. On the last run, I break and run and get out VERY nice to have to run the table. She is not happy, but I win 7-3. 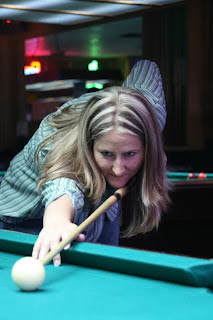 Me, posing for Shayla
I then have to play Ricki Lee Casper. I love to watch her play - she has a lot of talent and is capable of winning a lot of matches in any tournament. I run the first game out beautifully and feel very confident. I then miss a 9ball, then an 8, then another 8. It gets worse, as she plays great - she has me down 5-2 and I am trying not to think about the earlier games and then I am not sure what happens but I tie it up 5-5. She takes a break and that helps me even more and I seal the win 7-5. Wow. What happened? I guess I did force those misses out of my mind and just played pool and took advantage of my opportunities.

I then play Kyu Yi next. I felt good and after she scratched on the 2 ball in the first game, I ran out beautifully! Up 1-0. Then things just didn't go well after that. I missed three kicks and she got out. I scratched another time and she got out. I did have two more really nice outs from early in the rack (including a nice draw shot!), but two more misses and a break and run from her caused me to lose 7-3. I was bummed, because I thought I was playing okay, but she got out beautifully most of the games.

Then a group of us went to dinner at Texas Roadhouse. Gosh I love that place! Several ducked out before we sat down because they wanted to get back to the 8pm charity tournament, but we still had 12 of us. I got the skewered shrimp for the first time and really enjoyed them - they are tasty. Then we all headed back to the tournament and I sat around and chatted with several people - Danny Lee, Lanny Herrin, Samm Diep and others. It was great to get out and be around people after the few weeks I have had. I also thoroughly enjoyed watching Ashley being herself and in her element - she was having a great time and it was a joy to see someone really enjoy life. Everyone was laughing and enjoying watching all the ladies beat up on the guys. I went back to the hotel before Julie and was sound asleep by the time she came in. I was a tired little girl.

I woke up the next morning and decided to wash my hair, which means I would be pushing getting to my Sunday main event match on time, but did it anyway. I felt good going into the match against the always tough Heather Lloyd. A great shot and safety by me in the first game led to her three fouling me for the first win. Ouch! I didn't let it affect me and played my game and tied it 1-1 after a very nice shot on the 7 ball when she missed shape. Cue ball was on the rail and it was a long shot with a difficult angle and I just told myself to focus solely on the shot and not worry about shape. I stayed down and nailed it. She got on 2 and then another miss by her and I got on 2. She then had a difficult out and we both went back and forth and then she went for a tough 9 and missed it and I nailed a tough cut instead of banking it. I tied it 3-3. I then had ball in hand with three balls left and wasn't sure how to get on the 8. I finally made my decision, made a nice shot on the tough 8 ball to get soft shape on the 9 in the side, but barely missed it. She was up 4-3. At that point, I missed in the middle of the rack or early and she would get out. She won easily 7-3. I am not sure what happened, but again, only a few misses cost me the match. I did notice she was playing slower - by that I mean she stroked the ball a few more times than she used to, and it really, really worked for her and she missed less than I have seen in the past. She ended up getting 2nd place and Kyu got 3rd. I shouldn't be upset for losing to them, but I think it's amazing that when you play certain players, a miss causes you to not get back to the table and it truly is costly. Like my friend Sherry says, make every ball count. At that stage in the tournament, the players play better, and are better at taking advantage of mistakes and running out and not getting out of line. 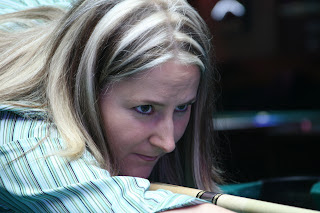 Close Up (just got my hair highlighted - I like it this time!)
I placed 9th, lasted until Sunday and just felt okay. Did I stay down like I wanted to? I doubt it. Although I felt like I played P O O L and didn't let things get to me, I still don't feel good about my loses... just a few mistakes, but they cost me the matches. It's funny, I wanted so desperately to play P O O L and I did, and yet I am still not happy. Is that because of grief? Because I have too much going on? Because winning the arm wrestling match with P O O L was not enough? I do not know right now; honestly. I have a long way to go... now doesn't seem the time to be able to get there... even playing P O O L didn't make me happy. Did I play my best? (this is from Mental Toughness Training for Sports). If not or if so, accept it and move on Melinda.

I stuck around only a few more hours. I so desperately wanted to see my Mom and left the party and drove home. It was so wonderful to see her! I have got a lot done around here, but my Mom fell in the tub Monday night and probably broke a rib. We were both feeling better about things and now this setback. She is so disappointed in herself for falling. I need to not think things are going okay - last time I let my guard down, my Mom went back in the hospital a week later in April. You think I would have learned.

I am numb... I don't know why. I guess it doesn't matter how much I get done.... my Mom's pain doesn't go away. And I only check things off as I get things done around her house, and yet spend more time away from her trying to get those things done.
Posted by Melinda at 9:41 PM