Must Do Well to Move Up

As a tournament director of a handicapped tour I hear a ton of complaints when a player finally has their first real good finish.

I get SO FRUSTRATED!!

Not because I can't handle the whining, but because do people not really realize that in order to move up you have to have a few good tournaments first??

People don't seem to truly grasp that in order to move up, you need to place well a few times or place real high one time to finally be moved up.

Instead, everyone complains and bitches about their handicap when they finally have a good finish, "They aren't a 6" I hear over and over when a player is finally having a good finish.  Further, people don't see that the player themselves are trying hard to move up, too.  They practice, read articles, watch videos, all they can to move up.  And then instead of getting compliments of their great finish, they get complaints instead of kudos.

It's such a crazy thing that people don't really recognize or comprehend you can't move up without first doing well, lol. 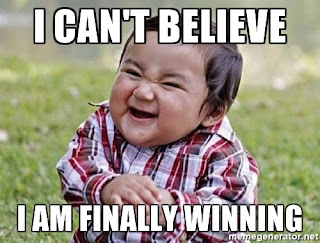