If you have been following The Danielson Series I bet you are chomping at the bit wondering if he used a checklist during his last tournament, right??

I was wondering too!

Quick background, checklists can be an amazing resource to a player as reminders before and during tournaments and Danielson and I talked about this before his last big event, as he didn't have a checklist.

So, did his checklist help him?

Wait, did he even write a checklist?

I figured he didn't write a checklist, I admit it.  So I surprise him Saturday morning of the Omega tournament and gave him one. 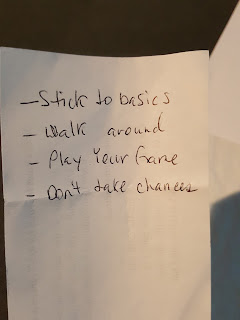 The only thing I added that I felt would be helpful was "walk around."  Otherwise,  the three other  items he had told me he wanted to remember.

As I handed him MY list for HIM (lol) he told me, "I already wrote a list."  Oh?  Embarrassed that I didn't have faith in him, but so elated he listened to my advice, I then asked him, "Oh cool, well let me see yours.  What is on your list?!"

You have to have it on you at all times during an event!  He countered that he went over the list several times in the car, though.

But, he then carried my list around so he had something on him that weekend to go over reminders.

He told me before the tourney started that he never plays good at this certain pool hall, so I think that helped any of his expectations - ie reverse psychology - because he felt no pressure.  So, he ended up lasting until Sunday!

I asked him if he looked at the list at all and he said, "I did look at it during some matches... and I think it really is a good reminder."

So, while the checklist isn't the all-knowing-quick-fix-solve-everything-tool, it is a GREAT tool in our toolbox to have.  And certainly doesn't hurt to re-read important reminders before or during a tournament! 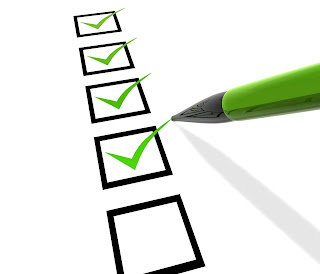 Email ThisBlogThis!Share to TwitterShare to FacebookShare to Pinterest
Labels: Checklist, The Danielson Series