Being a Leader Takes Self Reflection

One of the humbling lessons I've learned running the Omega Billiards Tour is it doesn't matter my personal distaste for a player or not, I must be cordial and nice to them.

But, it even goes beyond that.

A player who has never played on the Omega Tour signed up in February for a stop in July.  Seems no big deal right?  Happens all the time.  However, I just happen to have history with this guy.  And not good history.

He is the one I wrote about last year ("The Clapper") who was rude to me during a tournament.  Read all about my emotions and his unethical behavior here.

It wouldn't be proper for me to deny his entry fee because he pissed me off last year.  That would have been unethical on my part.

Confession:  The thing is, I have not treated all players equally or fair the entire time of running the Tour.

I unfortunately learned from my upbringing to ignore people when they've upset me.  Learned this well from my Mom; she didn't speak to one neighbor ever again because of a comment he made about her in 1980.  Throw in that I'm female, and it seems to be part of our DNA.  You know the joke - guys get into an argument and are friends in 5 minutes; girls get into an argument and don't talk to each other for 5 years, lol.

Whether clique or not, it's not right to ever ignore anyone because you are upset at them or because they hurt you.  Sure, it's a "normal" defense mechanism we use to protect ourselves, especially right after we feel hurt.  But when running a business, it's really not the right thing to keep doing.

When I first started the Omega Tour over five years ago, there were a couple of players I was upset with, and so unfortunately I wasn't nice to them.  I wouldn't really ignore them, but I wasn't real friendly and I was cold to them and barely made eye contact because I was hurt by their actions in the recent past.  I was also rude to a couple of players when I ran the Ladies Tour.

You might think ignoring people because they might have hurt you or because you don't like them is childish and rude.  And well, you are right!

Every single time I did that, I was WRONG.  It was a VERY unprofessional, rude, and unacceptable behavior on my part!  I am still ashamed how I acted.

However, I have luckily realized my actions were wrong.  I don't care what history we had or if I'm still upset with a player for something personal, the bottom line is I run a business and I need to treat everyone with respect.

"The Clapper" played this past weekend and we were both kind to each other and there were no issues.  And I also wasn't a bitch to him - NO reason to act like that at all.  I was a professional.  I was a leader.  And it felt good.

The point is, no matter your position, always treat people with respect.  And as a Tournament Director, this leadership position for sure means I need to act like a leader, and not like a child. 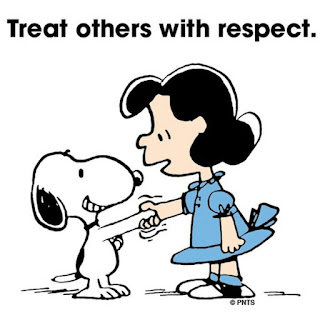