When You Beat Your Kids

I have mentioned a couple of times that the Omega Tour is now using the Fargo Ratings to rank player's handicaps, instead of going by just known ability.  We implemented this change with the first stop of the year (in Jan).  This takes out any "opinions" and is based on stats.

This meant that some players ' handicaps moved up and some moved down.

A father and son are frequent players on the Tour and the Dad moved down from a 6 to a 5.  The son remained a 6 handicap.

(btw, your handicap number is what you race to in the matches).

For the first or second time in 5 years on the Tour, they ran into each other on the bracket.  Come Sunday morning, father and son had to battle it out!

I see them playing and playing, battling it out, and finally the Dad comes over and tells me that he won and what the score was.  As I'm writing down his name on the bracket, he leans in and confides to me, "When I was on 4 games and won the last game of the match, he tried to rack for the next game because he didn't know I had won already.  I told him, "Daddy goes to 5...."" in his sarcastic, funny, proud voice! 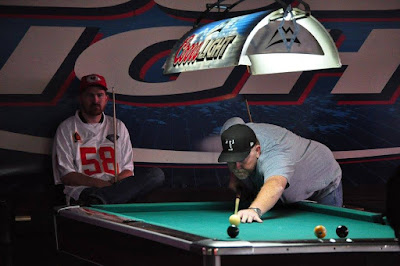