Watching And the Effects

I eluded that I was helping a friend by sparring with her a few times before a big state tournament.

She mentioned a couple of weeks later that she was going to play league playoffs and I surprised her and showed up to support her and her team last Saturday.

Well, let me be honest, there is A LOT to this situation that I hadn't considered.

As I walk in, I sit over by her team and everyone else I know there is poking fun of me to sit in the middle between teams, as it looks like I'm playing favorites.  lol.

I'm not there even 15 minutes and my friend is up next in the line-up and has to play a game for her team.  Little did I know it was the hill-hill game.  That can be pressure, I don't care who you are.

As I'm watching her play this game, it hits me pretty strongly.  OH SHIT, am I a distraction?  Will she be able to play in front of me?  Or will she be wondering, "What would Melinda want me to do?"  Or, would my presence remind her to walk around more (one thing we talk a lot about).  Or would she be thinking about not making a mistake in front of me?

I am happy to report she BROKE AND RAN!  For the team win, too!  Pretty awesome to always witness that :)

After her well-deserved accolades from her team (and the other team), I waited a bit and then we chatted about this very thing.

She shared that she was aware I was there, but it didn't bother her.

She then said if she did something wrong, she knows I would say something.  I expressed that when it comes to shots, I wouldn't say anything because I wouldn't want to put any negative thoughts in her head about what I might be thinking.  I would, however, offer any type of pre-shot help though - you rushed that shot or didn't stay down (for example).

But more so, she already knows what shots she should and shouldn't do, even if she doesn't choose the shot.  Which I love about her awareness of the table already.  So because of that, there's not really a way for me interfere negatively with her mental game if I'm watching from the sidelines.  Whew!

I should have told her right up front that I wont talk about any shot unless she is curious about something that happened during a game and she asks me about it.  Otherwise, I'm not there to second guess, I'm there just to support and watch and be near my friend. 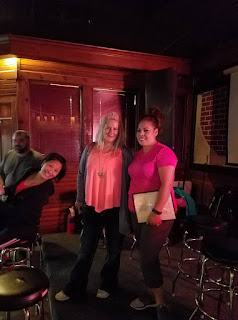