Pre-Shot Routine is a Habit

A friend of mine lost his chalk holder one Saturday night during a big tournament in October.  However, he didn't realize it until the next morning when he was about to play his first match of the day on that crisp Sunday morning.

It's the type of chalk holder that has a long end, where you can tuck it in your pocket, and the chalk hangs out.  Kinda like this: 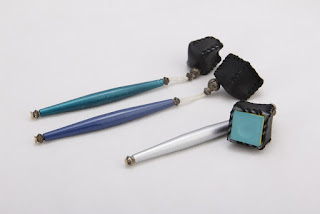 I remembered another friend asking me if I knew who's this was, as he had found the chalk holder that Saturday night on the floor.

I immediately texted my friend Sunday morning, "Hey, I found out who's chalk holder that is and he needs it back."

The player said he would be okay that morning without, but I knew how uncomfortable he would be all day.  I knew that if his pre-shot routine included him tucking his chalk holder in his pocket after every shot (which he does), then he would be doomed....

Habits are hard to break.

And your pre-shot routine is a huge habit.  If that habit is broken or altered, it will very most likely affect your play just by the distraction of not doing something you've been doing every shot for years.

The player did not get his chalk holder back that day, but will at the next tournament.  He told me he has had it for 10 years or something and it means a lot to him.  Can you imagine a pre-shot routine for 10 years and then one day you have to change that routine?

Here is another important point:  IF that did not affect his play, then he needs to work on his pre-shot routine.  Pre-shot routines are essential, critical parts of our game.  The more routine it is, the better chance we have at focusing on the ball in front of us the same every single shot.