On May 14, 2016, Paul Huebler turned 89.  On June 8th, he passed away.  One of the icons in the cue industry, Paul will be greatly missed by his friends and family and the many players who own or have owned a Huebler.

I am one of those players.   My very ever-first cue I owned, was a yellow-toned beautiful and beautifully-played Huebler.

Another great one in Heaven.  RIP, Sir. 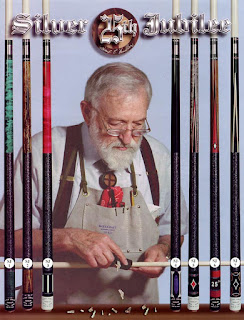 Here is his story (from his obit), which shows what a great life he lived:


Paul attended school in Chamois and was of the catholic faith. He served his country in the United States Army.

Paul, the youngest of eight children, developed a knack for woodworking at an early age because his father and grandfather were both cabinetmakers. Paul also developed a love for the game of pool. Unfortunately, an accident at a young age kept him from pursuing a career as a billiards player. However, it did not stop him from owning a billiards room in Chamois and sponsoring many tournaments there. It was at his billiards room that he met Harold Schmidt, who was the owner of the A.E. Schmidt Company, a manufacturer of billiard supplies in St. Louis. In 1958, Paul was offered a job with them and later became their national sales representative where he built a loyal client base in many Midwestern pool halls.

In 1965, Paul surprised the Schmidt’s with the news that he was going to be a Catholic Missionary in Papua, New Guinea. While in New Guinea, Paul supervised natives there for 5 years in a lumber mill and this is where he learned about different types of exotic woods.

Paul came back to the United States in 1970 and immediately resumed his job with A.E. Schmidt Company. While Paul was in New Guinea the movie “The Hustler” came out and regenerated billiard play throughout the country. It seemed every pool player had to have a two-piece cue exactly like the one Minnesota Fats used to lick Fast Eddy in the movie.

In 1973, Paul left the Schmidt’s to start Huebler Industries in Linn. The Schmidt family helped him secure a loan and were also among his first customers.

Paul’s cues were known as “the straightest handcrafted cues on the market” and they sold for anywhere from $54 to several thousand dollars. Pool players from as far away as Germany, Japan, Russia and Australia have used his cues. Paul also served as President of the Billiards Congress of America, a Colorado Springs, Colorado based trade organization from 1982-1985.