Glass is Half Full: Upset at Racking

I've always appreciated how different perspectives can enlighten me.  Especially when my thought process might be negative, and someone shares a different point of view that brings attention to things I hadn't thought of.

At a recent Omega Billiards Tour stop, two players were in the fight of their lives (okay, just playing a close and important winner's match on Sunday afternoon).  One of the players is a regular on the Tour and very well liked.  His opponent was new to the Tour, yet a seasoned player, but had already ruffled my feathers by his words and actions and my interactions with him on Saturday.

During their match on Sunday, the newbie was making so much racket, I went to the other side of the room to see what was going on.  Turns out he was upset at the racks he was given by his opponent.  He was so upset that he was throwing cues on the table and hitting the sides of the table because of it.

And then *I* became very upset at this point.  Mad, actually.  He was throwing a temper tantrum and also accusing his opponent of cheating (because he thought he was deliberately getting bad racks).  Because his opponent is very up-standing and I've never had an issue with him over the numerous years I've known him, I was not very happy at what was transpiring.

The match was very close and the only thing I could do at that point was move the newbie's friends away from the match, because they all kept talking to him and each other (which I was also upset about).  It is tough to interfere with a match that is close to finishing - you don't want to cause more angst by stopping the momentum of the match by talking to players when it's almost over anyway. 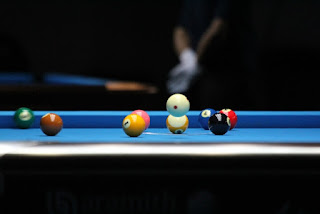 As I stood close by watching, trying to figure out how I should handle what was transpiring (i.e. his temper tantrum), I happened to stand next to a guy who had been watching matches all day long.  He was a player of the Tour and came back Sunday to watch matches.  I didn't say anything to him about my thoughts or that I was upset, I was just standing there near him.  All of a sudden, he leaned over towards me to talk....

He shared with me that we all know the regular player and we all know in our hearts that he would never cheat the guy or give bad racks.  But he also shared that he would be upset, too, if he was the newbie player.  He said the newbie had been breaking well all day long and to all of a sudden in one match go from making balls on the break every time to making no balls at all (and hardly any movement of the balls in the first few racks), that he understood why the new guy was upset.

It was quite remarkable how I went from a scowl on my forehead and tense shoulders to a calm face and relaxed shoulders after he shared his perspective.

The match went hill-hill and so I never talked to the newbie about his slamming of cues, but I am really glad that that player shared his thoughts with me.  It calmed me down and made me see things from the newbie's point of view, not just a Tournament Director (even tho I have to do that, too).   Sure, he still shouldn't have been slamming things around and causing a ruckus, but even I admit I was only focused on his reactions and bad actions mostly because of the issues I had had with him the previous day.

Good learning experience for me.

Email ThisBlogThis!Share to TwitterShare to FacebookShare to Pinterest
Labels: Glass is Half Full, Omega Billiards Tour