I found myself in a tough spot last month.

I was running the Omega Billiards Tour's 2nd stop of the year at the Billiard Den in Richardson and as the Tournament Director, I of course have to stay til the bitter end, lol.

Well, the finals was pitted between my buddy and former teammate Jersey Jack and newcomer Steve Collins.

This is the pic of the final three players.  Steve is on the left, David G in the middle and Jersey on the right: 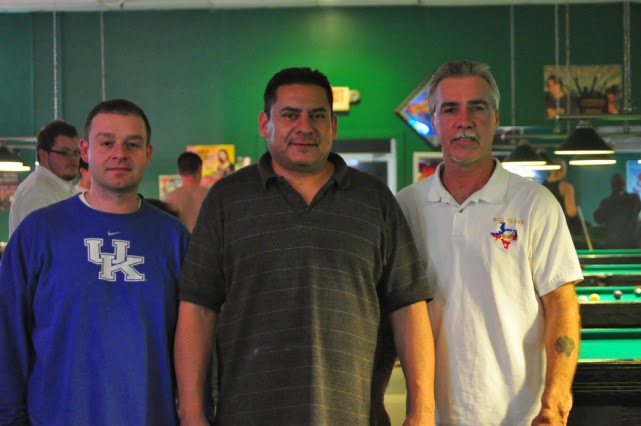 As a friend of Jersey's and a former teammate, it was natural for me to cheer on Jersey and to root for him more than Steve.  But I realized after only a couple of shots that I need to not be biased and stay neutral.

While I clap for great shots from ANYONE (either competitor at the table), as tourney director you cannot put your "friend" cap on or your "teammate" cap on; instead you have to be neutral.

It was tough, too.  I have been on a team for almost 2 years with Jersey and seen him play in Vegas with my Monday team.

But, I just rooted for him silently in my head.

BTW, he won!  It went two sets til 1am but he won his first Omega tourney!!  Steve out up a great fight but Jersey came through in the end.