I wrote in January of this year that someone kept using my chalk that I left on the table.  Most people use their own chalk - even if you leave it on the table, most people have chalk etiquette - but at this tourney I ran into someone who didn't care which or whose chalk she used.

I wrote something similar from May - where my check was even decorated and yet still used by someone else.  The nerve!

I kinda got a little miffed.

I thought to myself, maybe I should just start taking the chalk from the table, like a lot of people do.  But I wondered, how long would THAT take to turn into a habit?

Many people have their own chalk and if you don't want anyone else to use it, you take it when you when you sit down.  It becomes part of your routine - grab your chalk before you sit down.  But, seriously - how long would it take me to start doing this every time? 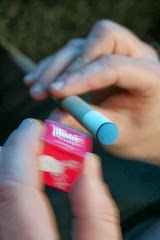 Others keep their chalk to themselves because they use it as part of their pre-shot routine, which is taught at pool schools (e.g. you think while you chalk your cue about what you want to do (so you don't think too much while down on a shot)).  In these cases, keeping your chalk with you is an integral part of your routine, you can't possibly let anyone else use.

Well, after Vegas in May when players touched my decorated chalk, I started to try to routinely take my chalk with me when I sat down/left the table.  I really wondered how long this habit would become "ingrained."

Heck within a month I was doing this!  Routinely!

You might think this is nothing, but let me say it this way:  I have been playing pool for almost 25 years and have never taken the chalk with me until June of this year, after only trying it for a month.

I realize it takes 21 to 28 days to form a habit normally, but still - even after 25 years I am pretty impressed that I am doing this now after only a month of "practice."

Email ThisBlogThis!Share to TwitterShare to FacebookShare to Pinterest
Labels: Chalk, Different and/or Interesting, Personally Me

Heck, Melinda, it's about time you cleaned up after yourself when you leave the table. :) What if I decided to leave my glove, or my glasses, on the rail each time I was finished shooting? You and I have joked about all this before, but I still feel strongly about getting to the table for my shot, only to have my pre-shot routine broken by having to move my opponents chalk before I get down to the table. God only knows why, but it seems that the left-behind chalk is inevitably exactly where I'm going to set my cue. I, for one, am so thankful when my opponent takes their chalk with them away from the table. And as for having two or even three pieces of chalk laying around on the rails ... don't even think about it.