I went to Winstar Casino a Friday or so ago.  I played poker (I now play $1/$2 no limit) from about 7pm until about 3am.  Finally got too frustrated with my table and decided to quit and go watch my boyfriend play.  I like to learn from him, and I sit behind him and watch his moves.  He's taught me to be more aggressive and also to bluff a little if it's a good table to do so at.  Before I was so passive, I would never bet on the turn and every bet on the river would then scare me off, lol. 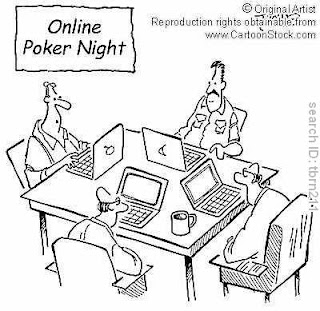 Anyway, it's about 730am and the refreshed players start waltzing in to take advantage of the tired players.  Luckily we eat breakfast and are now on our second wind, so we are not one of those dragging players.

All of a sudden, I hear a guy talking to one of the poker players on the $2/$5 table next to us that catches my attention.  He says these words:

I tap my b/f on the shoulder, "hey, those guys must play pool."

I ease drop some more, listening to their conversation.  They are obviously catching up, all the while talking in front of everyone at the other table.

"Yeah, he and the corporation are doing well."

I didn't know the word "corporation" was that widely known in regards to certain players.

Then I hear more names as the guy keeps giving updates to his friend:

I'm like, "who are these guys talking?"  They are obviously from the DFW-area, as they spoke about a poker game there that had a pool table that some of the road players come through to play on.

My curiosity gets the best of me and as the guy walks by me I ask, "What cue do you shoot with?"  That's my way of saying, "Yea, I play pool, too."

He tells me what cue it is and I share what we play with, all the while my b/f is trying to play poker.  He told me his name and the other guys name, and I have heard of the nickname "Backer Bob" but had never met him.  Nor this guy who was the main talker (I'll keep his name to myself for now) but he was an older gentlemen like Backer Bob.

It was so wild to hear these guys talk about pool for about 30 minutes.  I knew every name, already heard of every big game they mentioned, and was curious about the things I hadn't known about the poker room in the DFW-area with a Diamond pool table.

The casino opened up a new $1/$2 poker table and I sat next to the guy I just met and shared how much I was integrated into the pool scene:  Partner of AZB, previous TD of the OB Cues Ladies Tour, John Drew Hager's Mom was my best friend in the mid 90s, webmaster for some pro players, I custom design my own cues, etc.  With all the commonalities between the two of us in the pool realm, I'm surprised we hadn't met til this day.

I should have stayed quiet, tho - maybe I could have set up a good pool match with him, lol.  Just Kidding!
Posted by Melinda at 11:27 AM

Email ThisBlogThis!Share to TwitterShare to FacebookShare to Pinterest
Labels: Different and/or Interesting, Poker