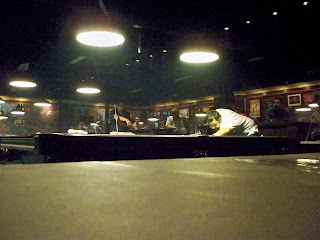 Charlie Bryant and Chen in the finals
I was very excited to play at the Fast Eddie's Tourney in Waco, Texas in October because the pool room is only an hour and 15 mins from my house. It's such a treat! However, the treat almost turned into a trick as only 30-something men were in the Open division and on Sunday only 6 ladies entered the ladies event. That is not a typo - SIX. Lewis almost didn't have the tournament for us, but because the ENTIRE field traveled 1 to 2 hours to get there, he graciously let us play after giving it some major thought. If I didn't tell you that part already, then you'd be very excited for me when I tell you I placed 4th in a tournament! Yay 4th place! Yay! Ha-ha - sure, 4th outta 6. lol. Don't worry, I am embarrassed for myself, too. 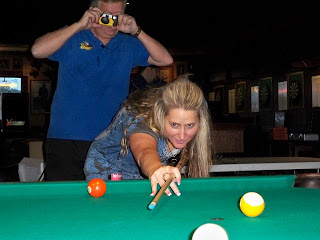 Lewis being funny taking my pic from "behind" lol
I got a bye first (lmao! - who didn't?? lol) and then I played Julia Rapp. I told myself I could win the match if I didn't beat myself, but I ironically, that's exactly what I did! I was ahead 4-2 and lost 7-5. I wrote about it earlier - how I lost focus, didn't really concentrate anymore when I was ahead and she started to capitalize on my mistakes beautifully. I love it when she plays well, but I was no longer playing well or thinking about finishing the match. :(

I then played Kim Pierce and we raced to 7 on the one-loss side and then I found out Lewis wanted us to race to 5, but that was after we were done, lol. I won 7-5 but Kim really started to play well at the end of the match and I admit I almost lost. I then played Alicia Teskey next and even tho I think I "should" win, I lost 3-5. She made two really nice 9-ball combos the first 2 games and then one tricky, failed shot by me when it was 3-4 sold out the game. I knew, too, that a miss would lead to her getting out (there were only 3 balls left), but I thought the safe was 50/50 for the shot and so I wrongly went for the shot, even though I had missed that shot a couple of times during the tourney already. :( Quarterbacking! 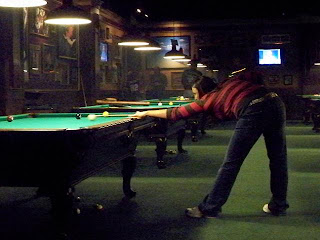 Amanda playing Alicia.
Amanda and Julia split the tourney and I was happy for them. I drove all the way back home for that whole hour and fifteen minutes (hehe) in the daylight. I was very happy Lewis let us play - this blog article would have had a whole different flavor if we didn't play, lol. 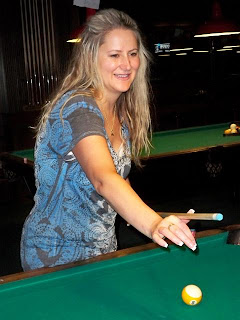 One Word Tourney Description: Confused
Posted by Melinda at 10:59 PM