What do you do to Improve?

A friend of mine, Tina, has been working on her game so much so, that her persistence has paid off.  She recently won her end of season league tournament - a first for her! 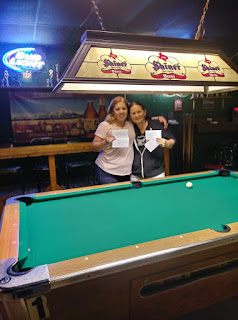 Everyone has noticed her game has gone up and her stats and finishes have also soared. So, of course that led me to wonder what she was doing to improve.  But I didn't need to ask her.  If you follow her on social media, it's evident.  She WORKS on her game, works on improving, and works on learning.

Here's my question to some of you: Are you just playing pool?

But if you want to improve, what are you doing about it?

Don't be upset with me with the harshness of this statement, but:  just showing up at league or tournaments is not enough.

It's almost like she read my blog from the past where I shared many things one can do to improve your game.  I was ADAMANT many times that in order to improve, you MUST play in many different type of tournaments (yes, some tough); you aren't going to improve by just playing in league.

If there is a stream on over the weekend, Tina has it on and she's watching. Watching great pool and patterns helps our game immensely (I've written about this before here).

side note: as I was writing the draft of this blog post last week, I noticed Tina posted this on her FB: 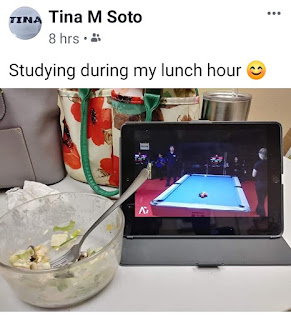 Oh, and guess what?

Additionally, she reads.  I know, so rare! She will get out her reminders and go over them. Or she will grab a Phil Capelle's books and read some sections.

Further, she will sit herself in the front row of tournaments and watch matches while she waits for her own match to be called! I have written before about how crucial this is. And, she is taking advantage of the "free" learning lessons by watching the great matches right in front of her. She could be sitting in the corner reading a book, or drinking with her friends at the bar, or playing video games to pass time. Instead, she's using her time wisely.

See what she's doing?  She is working on her game!  She hasn't been playing pool for a long time, but for some reason, she knew in order to improve, she needed to put in work for her pool game to improve.

I can easily admit for the first 10 years of me playing pool, that that's all I did - just play pool.  I only played on some tour stops and played on a league, and then wondered why my game never went up.

It took me years to figure out I needed to put in work and not just show up to a tournament and hope for the best.  I finally set practice goals, read, watched DVDs, wrote in my pool diary after each match, practiced diligently, and played in a ton of different events. And guess what happened? Yep, my game improved. I became more successful in my tournaments, in my standings, and started to win tournaments.

What I love about Tina's journey is she knew pretty soon out of the gate that she if she wanted her game to improve, she needed to work on it. And, so she did!

Again, if you want to improve, are you just playing pool?

I love this and I have also noticed! Go Tina GO!