What Can Help Your Pre-Shot Routine Under Pressure

A couple of weeks ago I was watching a stream because one of my friends was on it. I don't check them out all the time, but I get more interested when I personally know one of the players.

My friend is an up-and-coming player and I happened to catch the end of his match and watch him play a couple of games - the score was about even (5-5), so it was a close one!

As I watched him, I kept thinking to myself I needed to get a hold of this guy and help him with his fundamental! He wasn't staying down at all and he was rushing his shots. That caused him to miss a lot. He also cared more about shape than making the ball, which also caused him to miss. His body language showed he was frustrated (and maybe embarrassed, too, I'm guessing), but he was missing because he wasn't taking his time or staying down and didn't have a good pre-shot routine.

I guess I'm like the cat lady, lol, who wants to help all strays in need. She swoops them up and takes them home so she can care for them.

And that's what I wanted to with this guy! I wanted to reach out to him and ask if we can meet up so I can try and help him with this game. You know, instill in him that he needs to stay down and focus on the shot and stop rushing! He would see so much more progress in his game and faster results if he did this. I guess wish someone would have taken me aside and given me a deep cleansing lesson. So, I want to help him so he doesn't have to struggle for a long time like I did, and instead sees results sooner.

Btw, he ended up losing that match. :(

But then something happened.

I saw on Facebook a few days later that he linked to the match. So, for whatever reason, I decided to check out how he started in the match - did he take the lead first or did he make a come back or were they about even the whole time until I showed up at 5-5 when I watched it live the other day?

And what I saw is a HUGE thing that reminded me of a tip I received once that I am super excited about to share with you all!

So, what did I see? I saw that he was playing good!

Yep! He was staying down on his shots, he was taking his time, he wasn't rushing, he showed less "emotion" and he was playing jam up! One of the first or second games he even ran out from the 2 ball. I was impressed!

And then it hit me.

Without even seeing the middle of the match, I can tell you what happened. Why do I know what happened in the match without seeing it in its entirety? Well, because I'm psychic. No, no, that's not it! It's because I could clearly see his mannerism and body language and shot-routine were completely different from how he started the match to what I saw the other day at the end of his match.

I don't know exactly what happened (told you I wasn't psychic) but something "negative" happened that created emotions, stress, pressure, nerves, or embarrassment, etc that got his game off kilter.

What I learned once was, when you recognize you are playing badly/off due to pressure, or if you already know you will be playing in a pressure match, you need to take a couple more strokes than usual before you shoot the ball.

This may seem counter intuitive. You might be saying to yourself, "It is counter intuitive, Melinda. Everyone knows you should have the same pre-shot routine every shot; that includes the same number of strokes." And, THAT's TRUE. However, what you are trying do to when you are nervous or upset or feeling pressure, is to get back to your usual pre-shot routine. And taking extra strokes helps you do that and slows down your adrenaline a bit because your body has slowed down.

You see, the reason why my friend was missing wasn't because he didn't know how to stay down or not rush his shots. He was missing because he felt the heat of the game or was upset about something. So, taking a few more strokes before we hit the ball gets us back into our pattern. It slows us down. And that's what he needed - to slow down, stay down, be reminded of his great pre-shot routine. Nerves and pressure causes our pre-shot routine to leap out the window. Our arms feel like jello and we keep missing and we don't know why, which frustrates us even more. But, taking extra strokes before we shoot the ball keeps us down on the shot longer, which helps us from jumping up and rushing. For whatever reason, it WORKS.


I feel a little embarrassed I wanted to take my friend home and care for him like a stray, lol, when in fact he already shoots really good! Just needs to have this tool in his toolbox for when the situation arises in the future.

Don't worry, I will let him know (guess I'm still kinda like that cat lady after all). 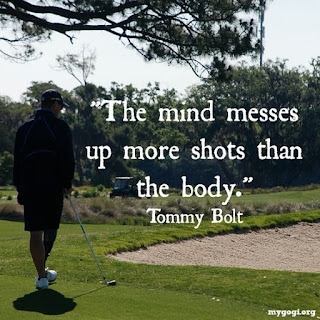