I was watching a player in a match last year on the Sunday of an Omega tournament.  He really studies the game and practices, and it shows in his increasingly high finishes, even though he's not yet one of the top players.

I am very impressed with how much he has improved and how well he knows the game.

In this match, I saw him miss a crucial 8 ball.  He was trying to get shape on the 9ball, but he went for a tough shot on the 8ball and missed it in the side pocket.  As soon as I saw the shot, I thought to myself he should have used a different route to make the 8 ball (an easier shot) so he would for sure have a shot on the 9ball.  In other words, he took a risky shot and because it was a tough shot, it was missed.

Because I really like the guy, I decided to share with him (at the next tournament) my thoughts on his shot selection.  You have to realize I can't just walk up to some dude and start giving advice, I actually have to be careful how I even broach the subject.  Some guys take offense to a chick trying to show them something, so it can turn into a dicey thing.  But, I think you all know me well enough to know I am careful with how I word things to not embarrass him, upset him, or make him think I am better than him.  I am just offering advice.

Long story short, the conversation went very well!  We chatted about the different options and he explained why he made that shot selection (he wanted to get perfect on the 9 ball) and I explained why I thought it was better to go a different route (easier shot and still have shape on the 9ball).

After the great discussion, I shared with him I was glad he accepted my opinion so well, as sometimes guys don't react as receptive as he did.  He then shared something really cool with me.

He said that it's just like taking advice from a rabbit.

He said in his country (Peru) there is a saying that you can listen and take advice from anyone, but it's up to you to decide if you want to use it or not.

I loved it!  But then I asked, "Uh, what about the rabbit, though?"

He smiled and explained, "Oh, the reason why the quote mentions a rabbit is because in Spanish it rhymes.  Un consejo hasta de un conejo."

I always find it fascinating when someone uses a phrase or quote from their childhood or country.  Makes me feel like they remain connected to their history and they let me see a part of it.  That day was a cool day for me. 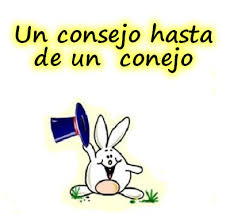