I found myself in an awkward position last month (Feb).  I saw a flyer for a scotch doubles tourney and I actually wanted to play in it!

I hadn't really /wanted/ to play pool in a while.  Would rather spend my time at the poker tables (and had been) so to even have a desire to play pool felt super weird.

Called my 'ole faithful partner that I've won several top scotch tourneys with (Greg) and he luckily said yes to playing with me.  :)

We had to race to one extra game because I'm listed as Advanced for BCAPL.  It's stupid funny really, because Greg plays so much better than I do, yet he's still listed as an Open player.  But, to be the reason why we go one extra game was kinda cool, too.

The first two shots I made that almost-too-cold-for March Saturday morning, my adrenaline sure was racing!  I hadn't competed in so long that it definitely affected my adrenaline.  After some deep breathing to slow down my adrenaline, though, I surprised myself with how well I was playing!  Esp for someone who doesn't practice and no longer has league.  And, I became more and more confident as the day went on coming with shots for my partner and playing well.

We lost our first match and then tore through the one-loss side before running up against a team that pushed us hill-hill.  I went for the correct shot but one of their balls nudged a little and blocked one of our last 2 balls and we didn't get out. 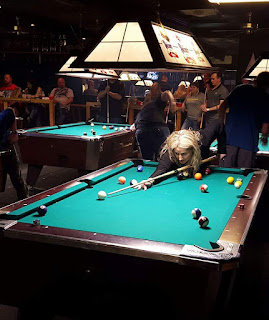 We got one-out-of-the-money (5th out of 24 teams).  I told Greg after wards it was my fault we were out because we had to go one extra game, otherwise we would have beat them.  Luckily he just laughed at me.

For as much as I don't feel like playing pool, every time I get to play and see how awesome I'm still playing, makes me KINDA want to play more.  I still do not even remotely want to play league, but I'd like to get in a few good gambling sessions if I could.  Maybe venture out once a month for a weekly 8ball tourney at least to keep me "in the game" ironically lol.

Had fun Saturday, even though I was itching to get out of the smoke (that I did not miss) and head to the casino/poker room.