Get That Confidence, Honey

A local female player and friend of mine has been posting on Facebook things like, "need to work on my mental game," or "I played good, but still need to figure out my mental game."

One time she even told me she wouldn't play scotch doubles because she needs more practice with her mental game.

I tried to explain that she needs to get out and play more tournaments to get that, but she didn't play in that tourney.

I do give her LOTS of credit for playing in big tourneys with tough players, though.  While she may not play in doubles events (which I'm still trying to understand), she has played in some tough-ass tourneys against guys.

I saw her in one big tourney back in December and I made it a point to talk to her.  I also shared this info with her husband, hoping he would share this information as well with her.

Basically, I told her that we need to get together and talk.  And that all the things she thinking of, I bet I think of, too.

And then I couldn't contain my thoughts (LOL) and blurted all this out:

While I'm no expert, I have played many more years than her, so I wanted to share with her how normal her uneasiness thoughts were, or her uncomfortableness was - how normal it really is, even for a player who is as seasoned as moi.

I shared:
I was trying to give her some more confidence (which leads to mental toughness).  She has one hell of an 8-ball game and if she got some more confidence, she would do even better in her matches and in league (and maybe play in even more tourneys!). 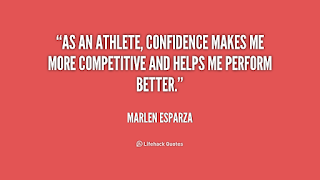 I wanted to pump her up - make her see how good of a player that she prolly has no idea that she is!  All the while expressing that her internal concerns I have as well, and that she isn't alone.

I think that is a huge sense of relief to know you aren't the only one on the "stage" with "everyone" watching you, and that it's normal to have thoughts of doubt.  Or, at the least, thoughts that distract us from the game at hand.

And once she realizes this, I hope it gives her more confidence (which I don't see why she doesn't already have!), then she will be an even TOUGHER force on the table (yikes, maybe I should stop giving her advice - JUST KIDDING!).  I love her game and her poise at the table.  One of the few good female players out there who also has great character.

I am honestly blessed to know her.