While I have accomplished a lot in pool (one title I've ALWAYS wanted to win (BCA Texas State singles), another I never thought I could win (a single Nationals title), how do I feel about my year?

You want the honest truth?

I don't feel any different.

I wish I had someone important by my side when I won those titles, instead my b/f at the time was always breaking up with me and not there for me.  I was alone for each win; for each title.  It was bitter sweet to win the ACS National 9-Ball Women's Single tourney on Mother's Day, though.

One thing I don't like is everyone keeps telling me I'm a master player when I am not.  I'd like to earn that title, before being told I can't play in events.  It's upsetting me a lot b/c it's not true that I am a master player.  I'm advanced ONLY with ACS.  Open player with BCAPL.

Yet, you win titles and people assume you are "ranked" higher.  I suppose that comes with the territory, though, right?

I didn't play a lot of pool last year.  I mean, I played in big tournaments, yes, but I only played in two OB Cues Ladies Tour stops and that's only because they were in town, lol.  I quit two of my leagues and now only play in my ladies league.  I don't even play in weekly tournaments anymore, either.

And then, someone in the billiards field said if there was an award for female amateur player of the year, he thought I should get it.  I never thought about that.  WOW, me, really?  That thought actually crossed someone's mind??  He said, "Seriously, it is probably one of the best season's that an amateur has ever had."

I don't really know about that, but it's sweet and awesome to even think that, really, of me and my pool year.  :)  Makes me look at the past year QUITE different! 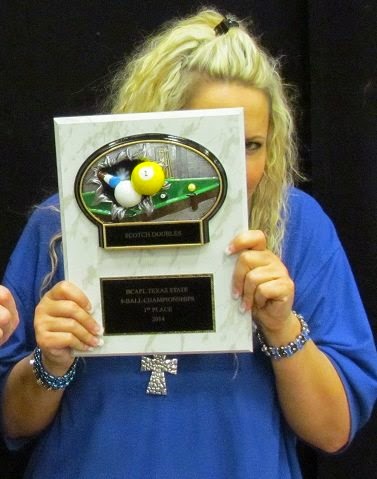 Soulful, painfully honest year-end evaluation by a champion. Remember, you are not alone. You have legions of fans who love you and want you to succeed. 2015 will be fantastic. You will know in your heart when you play like a master. Need more tournament play? I'm sure we all would love to see you at the weekend tournaments up in Bedford.

I sometimes forget what's right in front of me. Thank you, Babylon for the comment!

I am glad you were there for both! I only remember Connie watching the May tourney, but you are very correct - you were there at both! Love you, too <3