I played in the Season Opener of the OB Cues Ladies Tour last weekend (Jan 26th weekend) and in my second match, I was having a little bit of an internal melt down.

Some people grab their own personal chalk and take it with them every time they walk away from the table.  I believe I heard once it's taught in some pool schools that it's ingrained as part of their pre shot routine, so it's important to always have their own chalk with them.

For me, I really don't mind sharing, but I DO mind when the person is butchering my chalk!  I don't want my chalk gone in one day, or, I don't want an empty piece of chalk.

I can make my chalk last weeks or more.

So, imagine my surprise during my second match when my opponent kept picking up my piece of chalk and rubbing too long on their tip.  I could see the chalk dust dropping into the air, as she kept grinding it into her tip.  UGH!

It bothered me so much, I started to try to take my chalk with me back to my seat.  And, since that's not part of my routine, it was VERY distracting.  I would forget a lot, and then have to walk back to the table to grab my chalk, which of course made me feel self conscious.  I didn't want her to use my chalk, but I didn't want to let her know that;  I didn't want to offend her. 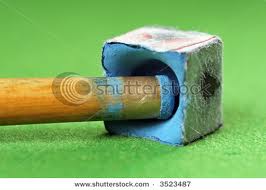 I almost felt like it was a race.   I'd sit down, remember I forgot my chalk, have to get back up and rush slyly toward my chalk and hope she didn't grab it before I could. And if she did get to it before I, then it would irritate me to see her abuse my poor little piece of chalk!

I doubt my opponent even noticed.

But, it was extremely distracting to feel so possessive about my chalk, lol, when she would torture it.  And yet it was also distracting when I had to keep going to get it.

Tough to focus on pool when I'm trying to protect my little blue friend!

OMG! Your brain is like flypaper. Is there nothing that sticks to it? And here I didn't even know there was chalk ettiquette. Any chalk left on the rail is fair game. In fact, I prefer you carry it away with you because it is always right at the position where I intend to shoot next, screwing up my routine because I have to pick it up and move it. Get a chalk holder! :)

I don't want to use a chalk holder ;)

Like I said, I don't mind if people use my chalk, but I DO mind if they abuse it. lol

It's an interesting perspective that leaving my chalk on the table might distract you. Hmmm. But, I'm not going to start using a chalk holder all of a sudden (haven't for 20 years and don't really have a desire to, lol). So, I'll just continue to join all the rest of the folks who leave their chalk on the table :) Sorry! Still, interesting perspective!

My biggest pet peeve with chalk is when people put it on the table upside-down or on its side, leaving chalk dust all over the rails. It invariably gets all over my hands and clothing. GRRRR!!!

I can sympathize with you on this one, though!

I agree, Jeff. I've written about that before - it IS annoying. And then I find myself turning the chalk right side up throughout the match, lol!

I prefer to leave my chalk on the rail also. Having to run around looking for it after someone pockets it, etc. is a total distraction. I'm surprised you have had so much success leaving it on the rail. Chalk abuse is an old shark.