Women on the Stream

This past weekend at the Texas Open, I had some major high points and some major low points.  I'll get to that soon, but before I do, I want to share a situation that happened to me that I'm not very happy about.

First of all, let me preface by saying had I won the match I'm about to talk about, this article would be entirely different and not as bitchy!

I had a bye, then won my next two matches on Saturday and Sunday of the Texas Open in Round Rock, Texas at Skinny Bob's Billiards.  I played FANTASTIC the first two days.  However, Monday was an an entirely different story.

I played pro player Vivian Villarreal about noon on Monday on the winner's side.  I played BAD!

Compared to my previous two matches, it was like I was a completely different person.

I know the culprit, too - lack of sleep.

I wasn't nervous at all, as Vivian is a friend of mine and I always use the experience as a good one when I play her.  I had competed with her numerous times, so nerves was not a factor at all.

I had a chance in at least 5 games but I dogged it.  Badly.  I could only run about 2-3 balls and after bad shape, I would then miss.  :(  I was so embarrassed how I played.  I know I can play SO MUCH better, but I just didn't show up.

And to see chances before my eyes disappear because I was playing bad, was an even worse feeling.

The lack of sleep really hurt me and I was not focused.  Further, she plays so fast, the match was over before I could recover during the match to figure out what was going on with me.

The WPBA Pros can only be shown on a stream table if the WPBA is given $50.  So, each time a pro is on a stream table, someone has to cough up $50.  If two play each other, that's $100.  No one was ponying up the funds to see them on the stream (even though everyone was asking I heard), so the women's matches were never shown.  Not even the semi finals or finals.  The whole weekend only the men were on the stream.

Now, why a match with two non-female pros was never showcased on the stream, I do not know.  But, usually, the men's matches get dibs for some reason anyway.

Anyway, so I knew our match would not be streamed and I was okay with it, esp since I DOGGED my brains out.

Embarrassment is such a horrible feeling.  :( 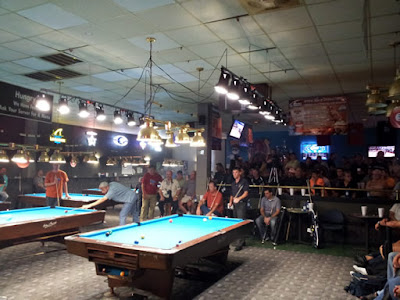 Here's the view from table I played my match on with Vivian, looking over the stream table

After I lose, I walk to the seating area and sit down with my friends.  I mention how badly I played and then my boyfriend tells me, as he's pointing to the stream camera/screen, "They didn't have a men's match playing, so they zoomed in on your match with Vivian and showed most of it."

Are you freakin' kidding me??

My bad play was on display for all to see?!?!

OMG...my embarrassment factor rose 1,000 percent as I sat there in utter shock.  I was mortified.  Perfect word:  mortified.

I know I am not suppose to care what others think.  I know it's just a game.  But dammit, I play better than that.  I played phenomenal the previous day - that match with Vivian that was now seen by everyone on the Internet (love my exaggerations?! lol) was not an indicator of how well I have been playing.  It did NOT represent me at all!

I was pissed and shocked.

And then the embarrassment feeling got worse inside me.

I'm still pissed as I type this.....  I feel blindsided for some reason.

I just started following your blog and I really enjoy it. As another lady pool player I am very upset for you too. Some one should have said something. The reasons are a mile long. I'm sorry you had to find out this way. Lack of rest or sleep is a killer on my game too.
Chin up and nice table!