As I mentioned before, I started a new Tour in the DFW-area for the plethora of players in the area, called The Omega Billiards Tour.

I am so excited that we already have confirmed two stops for this year!

And next year, we have 5 pool rooms already interested!  We *plan* to hold 6 stops, and then an end-of-season tourney with additional money added.  Right now each stop is AT LEAST $1,000 added.  We'd like to have the last stop be $2,000 added!  But, you can only be eligible for that stop if you play in at least 3 of the 6 events next year.

The Omega Billiards Tour is a handicapped tour.  The races are dependent on KNOWN ABILITY.  And the races range from 5 to 9.

Here is our known ability break-down:

What is key here is, we are not going by any rankings list of any league.  It doesn't matter what you are ranked in VNEA, APA, BCA, or ACS.  What we are going by is the players known ability.

For example, my boyfriend (and fellow TD of this tour) is officially ranked as an Open Player in the BCA, but technically, he should be an Advanced Player in that league.  Therefore, we are ranking him as a 7 on this tour because that is his known ability.

From his proper labeled known ability ranking, we are from there figuring out the rest of the handicaps.  In other words, if you play Brian (my b/f) even, then you are a 7, also.  It's fairly easy to determine which players are a 9 or a 5, it's everyone in between that can tough, lol.  So, comparing skills to Brian's is making things simpler.

Of course, as to be expected, we are getting some flack for our rankings.  Just from a few people, luckily, but those few are pretty adamant they should be an Open player (racing to 6 on this Tour).  Well, when they go the BCAPL Nationals, they ARE ranked as an Open Player, but because they play Brian even when they gamble, they are going to be ranked as a 7.  So therefore, they are not an Open-Ranked player on the Omega Billiards Tour.

I appreciate them speaking up, as this is all a learning process for us and we did already have some errors, but I just hope they truly understand we are going by known ability and not official rankings of any leagues.  We want this to be a "true" tour, if that makes sense.

The TDs decide the rankings, after we discuss it among ourselves (there are three of us).  And if we don't know their skill level, then we ask fellow players or league directors.  This isn't a dictatorship, lol.  However, if a player does not like their ranking, and we feel strongly they should be ranked a 7 or higher, then they don't have to play I guess.  We have plenty of people already on the standby list.


The first two stops are limited to the first 64 paid, and as of last night (Sept 24) we are FULL for the first stop!!  I am SO excited!  A new tour to the area FOR the players! 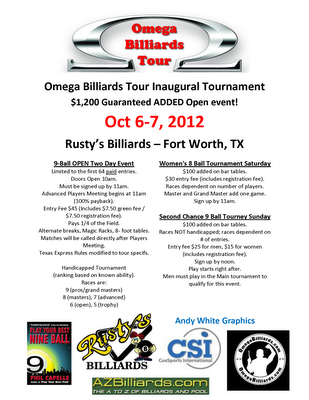 A HUGE Thank you to Michael Hoang and Darrin at Omega Billiards!  And to Tracie at Rustys' for holding our first stop!