My expectations of the OB Cues Stop in Tulsa at Magoo's the weekend of July 23rd? None. I didn't think I'd fair well, I hadn't practiced in a couple of weeks (not like me), and pros were allowed to play. I just didn't feel comfortable: in my skin, confident, or any positive emotions. As a matter of fact, I almost couldn't go and wasn't even the slightest disappointed in that. That's how much I didn't think I was prepared for this tourney. 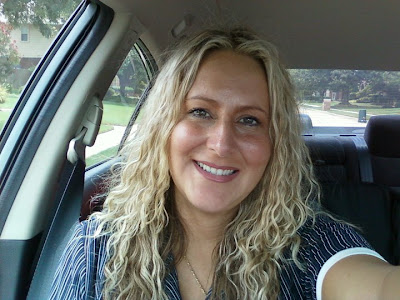 On the way to Tulsa!
I drive up Friday with Julie (one of the OB Cues Board Members) and it takes FOR-EV-ER. Ugh. I am tired from lack of sleep the night before, stressed at work with a new project, and just wanted to already be in Tulsa, somehow magically! We finally get there and quickly find my weekend roomie, Rebecca, and we head to Tokyo Steak House - my normal Tulsa routine. :) It was yummy as always (LOVE fried rice without onions!). 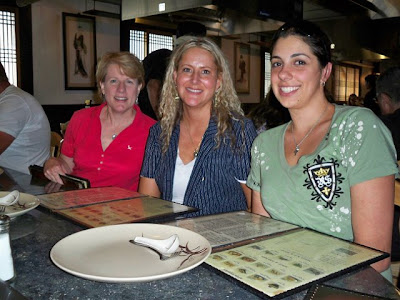 Julie, me, and Rebecca at Hibachi!
On Saturday morning at the Player's Meeting we all find out only 28 players are there. WOW!
:( We usually average 42 players a stop, so that was disappointing. :( I looked at the brackets and noticed I had a fairly decent draw if I could win some matches and NOT the mental game get to me. I also wanted to do well for points because I didn't do well at the lat stop last month on the tour. However, as everyone knows, looking ahead and thinking of the future is not productive thinking.
In my first match, I played a girl who had talked behind my back about a year ago and so I wasn't all that "happy" to be playing her. She pretty much went around and told people I had a bad attitude when I played pool, and she said this about me when I was a Board Member of this tour and so I took it hard, knowing I was a representative of the tour AND knowing it wasn't true. Anyway, I wasn't into the match at all and slouched a lot, looked around a lot, etc. I should beat her, but it actually went hill-hill with her getting on the hill first. I really focused hard toward the end of the match (about 5-5 when it got too close for comfort), even with my adrenaline pumping and being nervous I might lose. But I started to "act" confident and focused on staying down - I ran out nicely the last game to win because I focused on staying down. :) I almost lost, though, and a few key balls would have made all the difference - in her favor to win, and in my favor to let it go 7-6.

I then play a good friend who is always difficult to play. I am very aware in my mind when I play her that she has had lessons and I second guess myself against her, but I also love to watch her play because of her knowledge. I again wasn't into the match in the beginning and had to remind myself to WANT to win because I was so not mentally into the match. I had to remind myself that I did want to win - take advantage of my draw and not let this slip through my paws again like can happen with the mental game. It was close til 5-5, but we both didn't play our best. Eventually, I started to show less negative motion, sat up straighter in my chair, sang to some songs, felt better and stronger mentally, and switched my thinking to WANTING to win. I then played a tad better while she got a few bad rolls and I won 7-5. 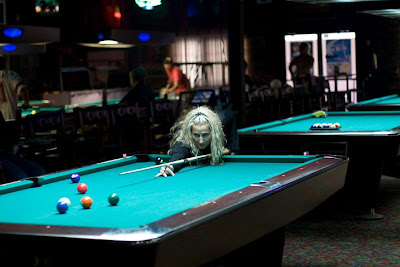 Me, on Sunday morning (photo by awesome tour photographer, Shayla Neris)
I then really over-thought in my next match - yes, while I am playing - and I know if I win, I play for 5th on Sunday, I get more points, I can win, etc. I was definitely thinking in the future and shouldn't have. I was playing well, though, and about to go up 5-2 when overconfidence got me (dang it) and I missed the somewhat easy combo and she got out. Then she had a combo on the 9 early in the next game. Ugh. Instead of 5-2, it's now 4-4. I make more mental errors and it gets to 5-5 (when I broke my cue (ironically)) and she gets on the hill first. I still thought I could still win though and I do indeed get a chance to win as I get on the hill with her, score 6-6. I had a few chances, but dogged it and she is running out the last few balls. It was my time to win though, as she missed a heart wrenching 9 ball. I really did feel bad for her, but this also meant I was still on the winner's side on Sunday. Wow! 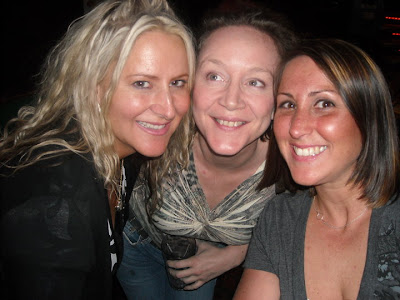 Great friends, Jennifer Kraber and Amada Lampert.
I sit with my friends, drink kamikazes, and watch matches throughout the rest of the evening. Julie takes Rebecca and I to our room and of course I can't sleep as usual. I can't get my brain to stop thinking at night anymore - too many things going on in my life that keeps me up at night. Ugh.
The next morning I warm up and feel good about my stroke on the tight tables. And I don't feel tired, even though I know I should be. I have to play Janet Atwell (one of the pros in the tourney) and she played SO good against me! I didn't have many chances, but the few I had, I scratched in weird places and only got 3 or 2 games against her. She played beautifully and took her time. I felt maybe I shouldn't be playing pool anymore, lol (seriously, tho). The difference between our games were so large, I really did wonder during the match why I was playing pool. 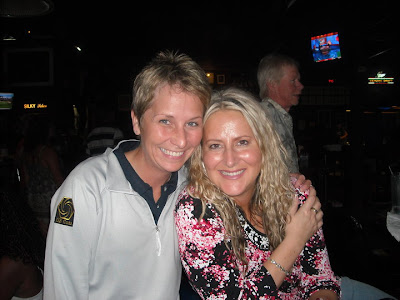 Janet Atwell and I. She's SO nice, awesome and talented!
I then get to play on the stream table next against the other pro, Belinda Campos Calhoun. She is a friend of mine back when she lived in Texas. I figured she was going to win, I had a couple of things upset me right before the match, and I wasn't into the match in the beginning like all of my Saturday matches. Eventually, I noticed I was missing opportunities, HAD opportunities, and then I again focused on having that heart/desire to win. I overheard one of the announcers say I wasn't taking advantage. I tried to not let that get to me and my self talk at first got me upset, but then I told myself, "well, it's true, now move on." I then made the desire rise up in me, all the while I tried to quickly move on from any mistakes and play the game in front of me (I really was proud of my mental game this weekend). At 5-5, I played like a different person - I played SO darn good the last two games to win 7-5! It was pretty crazy to witness, really, the difference from how I played in the beginning to how I played in the end (check it out for yourself, here). I was SO excited to win. I couldn't believe I won! SO happy I played well at the end, too. Yay!

I then played Tara Williams next. I was pretty much in awe of her shots throughout the match. She spears in long, straight-in shots. She doesn't miss them like I do all the time. She is super solid with tough, long shots and I was so enamored with her stroke. I did however wait for opportunities and a few arose, and I got to 4 when she was on 5 games with some of my own good shots and banks. She missed a tough 7 ball (b/c of the tight picket) and I had to throw in the 7, but got perfect on the 8. BUT I didn't hit the 8 hard enough and left myself a backward cut on the 9ball. I normally love those shots but this time I missed it for some reason. So, instead of the score being 5-5, she goes up 6-4. :( She then wins 7-4.

Tara moves on to get third place! BCAPL teammate Ashley Nandrasy would get second place and I was SO happy for her! Janet Atwell placed first and became the Oklahoma Women's State Champion! Ashley defeated Janet the first set in the finals, and the second set went hill-hill. Proud of them both for doing so well! 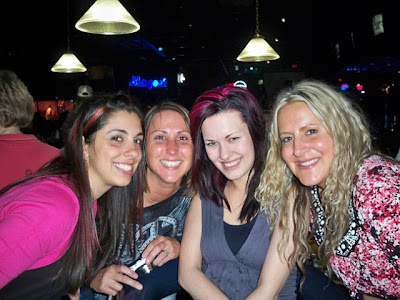 So, I placed 4th! WOW! I am still in shock, lol! And I moved up in the rankings to 7th. :) I really dug in deep during my matches on Saturday and feel good about my mental game. Even without practicing once a week the last couple of weeks, I still was lucky enough to have a few things happen in those weeks that helped me remind myself to stay down. But I fully admit I am still surprised how well I did!

Tourney description: Surprised and Happy!
Posted by Melinda at 9:37 PM