The Fast Eddie's Tour had another stop - this time in San Antonio, my hometown, the weekend of September 19-20.

It was bitter sweet going "home." I visited the house I grew up in, that my Mom and I just sold in April. It was still on the market (we sold it to a "flipper") and I talked to some neighbors as I spent my Saturday afternoon in the area. Saturday morning was taken up by my Movie Scene - read all about it here. 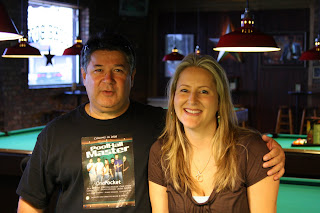 Joe Santos (producer/director) and myself after the movie shoot.
I got some sleep finally and woke up rested and ready to play Sunday morning. No rushing necessary and start time was 11am, so that's a beautiful way to start my day. I said hi to some friends and then attended the Player's Meeting.

29 women and no bye for me this time. I played Summer in my first match and she played good at first and I was rough on the edges, but finally kicked in staying down and following through and won 7-3.

I played Nina Almarez next. She is now a beautiful woman - whereas when I knew her before she was just a girlie teenager! And.... her game has really improved! Luckily I was playing well, but she was also playing really well and it got a little close for comfort for me. We talked a little bit to each other and I know, I shouldn't have, but she was a little nervous toward the end of her match when her Dad started watching and so it made her feel better as I was talking b/c I was a little nervous myself b/c she was playing well. I got on the hill first but she got to five games and then I caromed the 9ball by accident to win 7-5. I really was VERY impressed with her game. She lives in San Francisco now and is a fashion designer!

I then played Heather Lloyd - one of the favorites in the tournament but I didn't let it get to me - I knew I was playing well. She broke dry the first game and I ran out! Nice way to make my opening statement. :) She won the next game, I won the next. She won another game and it's tied 3-3. She leaves me safe on the 7 but I bank it in. I hit the 8 REALLY bad and leave a bank on the 9 which I make, also. I am up 4-3.

In the next game, we both fight ourselves about what we are going to do about an 8ball that is nestled on the point of the side pocket. We play safe on the 6 and 7 back and forth and I finally decide to go for something with the 8ball but stop the cueball on the 7ball instead of moving it forward like I wanted to. I play safe from that position, but instead of separating the 8ball and cueball, it leaves her straight in.

Before the Safe (above).
I put right on the cueball.

After the (un)Safe, LOL.
The tit caught the 8 ball and instead of going down table, it landed in the middle AND my cueball didn't come back down the other end of the table like I wanted/planned.
She ties it 4-4. I still don't give up and am ready to fight more - I want to stay on the winner's side - I want to get in the money and that means getting 5th place AT LEAST. This loss would set me in position for 9th-12th place (I know, I shouldn't be thinking of this during my match, lol). The next game I scratch on a 7 ball b/c instead of moving forward slightly, I moved forward an inch too slightly and left a scratch shot which I "hoped" wasn't a scratch shot. LOL. She goes up 5-4. She plays safe on the 6ball the next game but I can see it well and I am so excited, that after make the 6 ball, I shoot the 7ball too fast and titty hook myself on the side pocket for the 8ball! OMG. So, she gets ball in hand and gets out. She's 6-4. She gets out nicely the next game and wins 7-4. I felt like had been kicked in the stomach. I was no longer the happy-me that walked in the door two hours earlier. I couldn't smile and was down right disappointed and deflated.

I then played Nancy French Mason who I defeated at the Texas Open a few weeks ago. I knew the adrenaline in my veins was already slowing down but I wasn't sure how I would play since I wasn't smiling and not in a "good" mood. But, I played really, really well and won 5-2.

I then played Michelle Abernathy and she beat me last time we played at the Texas Open... but on this day I played better and won 5-3. So, I met my goal of "getting in the money"! Whew. But, I didn't want to settle for 5th and "just in" the money.

I play Cristina Dela Garza next and we are both on our game. I play real good the first game then got really, really tired and she gets up 3-1. I decide I need to do something to wake up and remember I have gum in my purse. Hopefully that will wake me up a little bit. It works and I win a few games even though I'm still mentally and physically tired. It goes hill-hill and she has to jump for the 2ball. I thought to myself, "she should kick it, she might sell out like her other jump." Well, that was an INCORRECT thought - she made the 2ball and ran out the very tough table to win the set 5-4! It truly was a tough rack to run hill-hill but she ran it like it wasn't hill-hill. She made a really tough shot on the 7ball to stay in the game and her three-balls-ahead shape was very effective.

So, 5th place, $80, a visit to my home town, a movie shoot, and a 4 hour drive home. It was a good weekend and even though I originally didn't want to go, I am SO glad I did - the weekend away was a nice treat for myself as I sang to the radio and listened to the Cowboys win on the radio for the ride back.

Description of tournament.. hmm... reaching my goal, playing well but still felt like I got punched in the stomach, overall good weekend.... better.
Posted by Melinda at 9:18 PM

Email ThisBlogThis!Share to TwitterShare to FacebookShare to Pinterest
Labels: Tournaments