I heard about this pool movie being made in San Antonio with the likes of Gabe Owen, Sylver Ochoa, Rafael Martinez, and Corey Duel. My friend Heather Lloyd also shot a scene in it and my friend (and regular with me at Rusty's Billiards), Robert Newkirk, is also in it.

The movie is called Pool Hall Master. Here is the website: http://www.poolhallmaster.com/

I met Joe Santos, the Producer/Director, at the Texas Open. I'm not sure how we actually met - if he came over to the "internet booth" on his own or if someone sent him over. Either way, I was delighted to meet him - I had heard a lot about the movie.

I made some comment, like, "if you ever need someone in a scene, let me know" as he left his business card and a shirt! I was proud that I got a shirt and not shy about being a ham. :)

He asked me a couple of weeks later if I was going to the Fast Eddie's tournament in San Antonio coming up September 21-22. I wasn't sure if I was going or not but my plans came into place and I was going to go after all, and I let him know. We chatted a little on the phone and he said he had a part for me with Sylver (one of the main characters). It was also one of Joe's last scenes to shoot for his movie. I was excited and very interested and so he asked a few more questions ("Do what to use your real name or not?" "Can you shoot the scene Saturday morning?" etc.). The answer to the first question was no, the second was yes.

He said he'd send me the script for my part. I am thinking, "This is pretty cool. I'll probably shoot a few balls with Sylver and if the scene doesn't get cut, I might be in a movie!" I have been interviewed by TV broadcasters and been on radio interviews (for my real job), but those don't last long enough to even know I'm on. LOL. 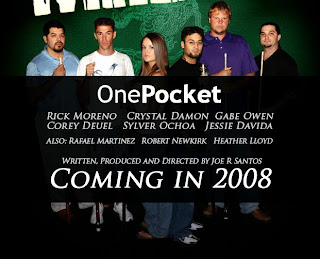 I get the script on Wednesday morning (we shoot the scene this Saturday) and I am surprised and excited - I have TEN lines! T E N. Wow! I immediately try the lines out at my desk at work. Then I take the script home with me and my Mom helps me go over the lines as we drive 30 minutes to the place we get our hair highlighted/cut. We try the scene one more time while our hair is drying at the salon and then we try two more times Thursday night.

I don't care that it's a straight-to-DVD movie, I'm excited!

Well, I'm in San Antonio as I type this. I shoot tomorrow morning. Tomorrow! I tried on about 15 different shirts/pant combinations last night to try and figure out what to wear for the scene. Do I wear my hair up or down? Do I wear it wavy or straight? All the important things to a chick! LOL. The camera adds ten pounds - I am well aware my weight loss from last year wont shine through on the screen and I may look pretty heavy, lol, but I more so hope to be able to not giggle as I say my lines to Sylver. Luckily I know him and he has already shot most of the movie so he should feel comfortable and so hopefully that will help me. We only have two hours to shoot the scene. I feel confident in my lines, but not sure I can keep a straight face when I look Sylver in the eye and "act."

I wanted to write this now before I shoot the scene so I could share my untainted thoughts before hand. I will try and get some photos tomorrow morning of what the atmosphere looks like and then post again.

Email ThisBlogThis!Share to TwitterShare to FacebookShare to Pinterest
Labels: Movie