I shared with one of Dave's good friends (Joe) one morning that initiative I announced in January, "Return the Faver."

The easiest way to explain the initiative was to simply share the link with him so he could read all about it.

He called me that afternoon and was so excited about this for Dave! He's been friends with Dave since they were kids, so this means a lot to him and he really loved the idea to keep Dave's memory in the pool world.

Then I discovered that wasn't the only blog post Joe read - evidently, he read some of my other posts.  He told me he had no idea that I played pool, lol.  Yet, he said, he could tell right away that I played well just by looking at the pictures of me.

"What do you mean?" I asked him

He shared and explained that when the cue is close to the chin, that is an automatic sign that a player shoots well. Means they have a solid stance, are usually seasoned, and normally stay down well on their shots.  As I thought about it, I did eventually get lower in my stance later in my pool journey, which helped my game go up.

I actually didn't realize my chin was so close to my cue, though, but it does reinforce what I tell people: that a player has a more solid stance and therefore are more effective if they are lower on their shots because their cue is much more level.

If you picture snooker players Allison Fisher or Karen Corr in your head right now, you automatically picture then lower near the table with their cue near their chin. Right? 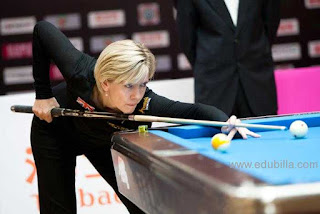 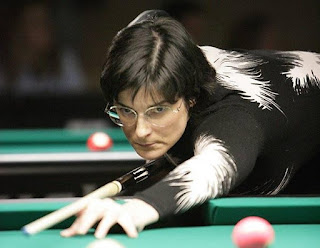 Well, it's not just snooker players - check out just this one male pro I picked from the US who does the same thing:  Mr Sky: 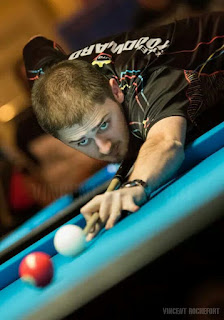 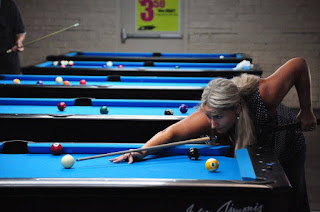 I have to admit it was quite cute that Joe went on and on about how he had no idea how well I played and he stumbled upon it looking through my blog. It really made me smile.