Steps Help with Pretending to be Drunk

One of the local pool room owners, when he first came into town decades ago, was going around town trying to hustle local pool players.

He would act drunk and hustle the money right out of their hands.

He tells this story much better and funnier than I ever could, but he went to this one local bar one night to see if he could make some money.

As he walked in to this bar he had never been to before, he had no idea there were stairs to walk down as you walk in the place: 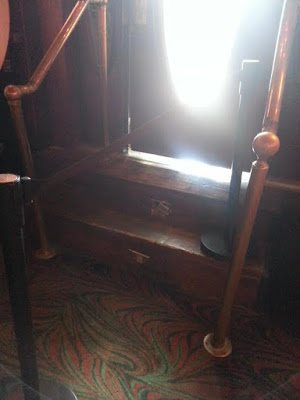 (I took this pic during my ladies league one night)

So, as he walks in, he falls down the steps!  He didn't even have to pretend to be drunk - everyone already thought he was by the way he stumbled literally into the room!

But, it back-fired.  Usually you want to show you have been drinking after awhile, not right off the bat.  So, it actually hurt him - no one wanted to play him because they just thought he was super drunk, had no money, and didn't really want to play some serious games, so no one wasted any time on him.

He doesn't even drink at all, and he tried to tell the players that, but they weren't believing him at all, lol.

Oh to be the fly on the wall that night.