I know I've written about this before, but after this weekend, I need to write about it again.

A friend visited Rusty's Billiards Saturday night to check out how the local girls were doing in the OB Cues Ladies Tour Stop.  He was shocked when he checked out the brackets sitting on the tournament table, where he noticed that I was already out and also one of my friends who is an even better player than I.

He walks up to me and says,"WOW, you didn't do very well.  And Your Friend did worse!  What is going on?"

Why say something to me?  Why point out the freakin' obvious?  Does it make him feel good to point out how badly we did?  Does he REALLY think we want to hear that?  Why say anything at all?

It reminded me of the Texas Open.  During one of my matches someone pointed out that I gave some games away.

And, Yes, he was a guy who shared that unfortunate tidbit with me.

I would never say that to a girlfriend.  ESPECIALLY during a match.  During a match we need positive affirmation, not reminders how badly we are doing. 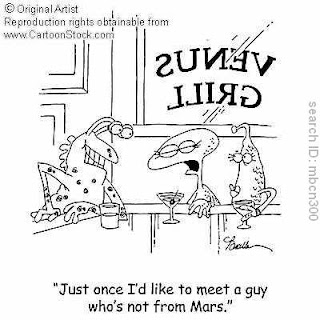 Males and Females really are different.  On Friday night I was at my regular hangout (Volcanoes - a pool room and sports bar) and one of the poker players/pool players told us his friend had told him he had gained a lot of weight recently.

I couldn't believe his friend came right out and said that to him.

I shared with the pp/pp that girlfriends could never do that.  You'll never, ever hear a female tell their girlfriend, "Damn, you've gained weight!"

Yet, guys can tell each other, "You've gained a lot of weight."  Or, "Damn you shot bad that match."

Even I am fully aware of the male versus female "gender-talk."  That same Friday night another friend told me how well he had played in his scotch doubles match, but right afterwards not in his singles match .  Since he was a guy, I knew he could take my comment: "Actually, it looked like you were struggling in the scotch doubles match, too."

Granted, I still chose my words like a female, but I bet a guy would have been more blunt.  And I probably wouldn't have said anything to counter my friend if he was female.

Mars men need to remember the Venus women.  Please don't tell us how bad we suck.  We have thin skins and soft egos, and you may hurt our fragile little hearts.

I have even told that guy (who came to the pool room Saturday night) in the past not to say things like that, but he just doesn't get it (or doesn't remember when he's trying to make conversation).  He just says what he wants, no matter what.  Hasn't anyone heard of Myers Briggs?

As a reminder, wait for our cue to say constructive criticism.  Or, how about don't say anything at all.  We already know when we gave the match away or played bad.  Don't rub it in, okay?  :)

And to all the males out there who respect that females can't always handle harsh words, thank you for being quite at the proper times or carefully wording your advice/comments!  We appreciate you!
Posted by Melinda at 3:07 PM

Today on the radio, a female DJ was talking about her male coworker saying that he thought a group picture they were in looked good. She pointed out that he looked good, but many other people didn't look their best. She went on to say that women would more likely say base their opinion of the picture on how everybody looked, not just how she looked. Not all men and women are like that, but it was an interesting observation.