At the Texas Open 9-Ball Championships held at G Cue Billiards in Round Rock, Texas over Labor Day weekend, the weather was not as hot as last year and also the owners of G Cue installed some temporary A/C-type units that also really helped the indoor temps. Compared to last years indoor heat wave, this was like night and day! Even the smoke was less, which was nice. 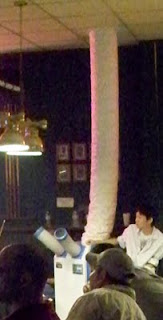 Here is a pic of the funny-looking A/C vent that helped!
I had a fabulous weekend and it was much needed. I had a lot of fun and learned some good pool tips and enjoyed being around friends. After visiting my Mom in the hospital for 6 weeks, it was nice to mingle among friends, meet new peeps, and get out of the house with my lipstick on. For those that don't get the humor, visiting hospitals is not a place where you dress up a lot.

Mom was well enough for me to spend the weekend at the Texas Open and away I went Friday afternoon. Traffic was terrible, but I still got there in time to hit balls by myself on an open table for an hour before the tables got full. My roomie for the trip, Amanda Lampert (defending champion), wouldn't get there until Saturday but I ate dinner at Texas Roadhouse with friends, Joe, Ashley, Ray and Viet My.

Then back at the pool room I sat with Anita while we watched her hubby Gordy practice with all sorts of great players - Cristina, Zaid, Sylver, HillBilly, etc.

After the Player's Meeting, I found out I received the ever-elusive bye player. I then had to play Hope at about 9pm. We were able to play a little earlier than posted and we got on our way. She made a lot of tough cuts and the match ended up hill hill. I played okay at first but then faltered in the middle but luckily ran out with ball-in-hand the last rack by staying down well to win.

I then played at 1:30pm on Sunday against Julia Rapp. I had many opportunities at the beginning of the match that I did not take advantage of. She eventually out played me the longer we played and her safes hooked me so well, she would get ball in hand and run out. It was a joy to see how much she has improved and loves the game. I think I lost 3-7?

I was very bummed after the match and talked with many people who would listen about how bad I was playing. I got some advice and moved on to my next match.

In my next two matches, I played SO much better and it felt great! But, I admit I also got a lot of rolls. I don't normally feel bad about rolls but in the first match it was pure brutalness for my opponent how many rolls I got. In the match after that, my opponent wasn't into her match and I won that one as well. While I was playing pool better and felt better, it was still kind of weird to win like that.

I then played my dear friend Ashley and I would have to refocus a lot to get back into the match every once in a while and even though I was ahead most of the time, it wasn't by more than a couple of games. She tied it hill-hill and after she missed an 8 ball, I put a lot of left on it to make sure I had good shape on the 9ball, but the lefthand English did not take and I almost scratched! Eeeek! I beared down and stayed down and felt good about the long cut on the 9ball but I missed it and left it sitting in the hole. I wasn't upset tho - I was playing better than when I started the tourney and I placed 5th! I was pretty happy. I was unhappy about the guy who clapped at the rudest times, tho. :( Very unhappy about that.

Ash went on to place 4th and Amanda defended her title and won the tournament! Woo-hoo! Thanks to James Barnett who donated $300 to the women's event! Very nice of him (and helped me earn $150 for 5th along with Julia Rapp). :)

BTW, I was able to ask Joe Salazar and Gary Abood about techniques for me to stay down on my shots and can't wait to get over the flu to try them out! I am excited. 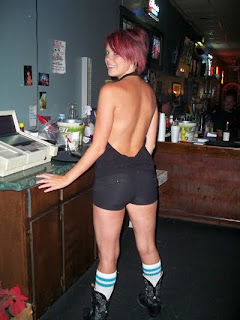 The "backless" waitress everyone was talking about.
The tournament atmosphere difference between this tourney and the Ladies Tour I am on is HUGE. OMG, HUGE! This event is jam packed with people and the spectators are not told they should not be in the playing area. People actually stand on the sidelines or sit in your area if there are chairs. Also, we can text our friends in the middle of matches and people can talk to you and/or your opponent. This is not allowed on the Ladies Tour and I can say how much I TRULY appreciate those nondistractions! Now I see why the rule is in effect - it sure can be a form of sharking and get under your skin.

On the tv table, anyone could sit in the chairs right next to players. Wow! Right next to them in the playing area! In my first match, a friend was trying to talk to me during my match. I finally asked, "can we talk later?" In another one of my friend's match, I texted her a message and she was able to answer me back. Later on, I walked right up to a good friend during her match and interrupted her (I felt so badly). The next day when I played, a guy was leaning against the rail in the playing area! And in my fourth match, people kept talking to my opponent. I vented to a friend and he told me not to worry about it. I didn't let it bother me when I was AT the table, but still. In the last match, Ash and I had a friend who kept talking to us as well. I played okay with the distractions but it sure makes me appreciate the Ladies Tour's spectator rules. 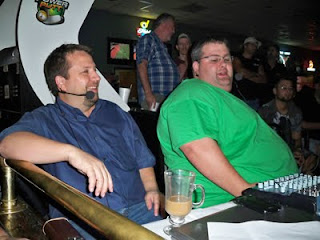 Ray and Juice, on the live Streaming BigTruck Show.

Commentating every now and then on the BigTruck live stream was fun and I wish I would have commentated more but was either playing, resting, or busy watching matches. I really enjoyed commentating with Juice - he's a blast! (he's in the green above).

I am very happy I pulled out of my bad play and was able to "play pool" after all by the end of the tournament. I was also happy to have placed 5th again this year, too. Whew. Makes me think I might know what I am doing. Hmmm.

Tournament Description: Well, if I didn't play well toward the end, my description would not be this, but now I can describe the tourney as: Fun.

i don't know about the socks worn by the bare-backed waitress . . .

LMAO! I don't think too many people noticed her socks, lol.