As I wrote before, I won the Most Improved Player Award at this stop for my rankings for 2008. The award is given before this final tournament of the year starts, so, as I play my first match, of course it's on my mind I don't wanna go out early. That would be embarrassing! Additionally, if I place better than 13th, I will even move from 6th to 4th. If I place 13th, I will be tied for 5th.

I play Deanna Henson first and I pay really strong in the beginning and she is faltering... but the tides turn and I start to miss shots and she starts playing better. I consider her a good friend and we reflect on the tide change later that day and that was nice to talk about.

I then play Marissa Hallett who flew in from New Mexico to play in this southeast Texas tournament at Legend's Billiards. I knew I would have my hands full, as she is a good player and BCA Open Champ! I got upset before the match about something stupid (not related to pool at all) and so I was ticked when we played. I guess that made me have a clear focus (I could feel my forehead crinkled, I was so upset) and I won that match by playing pretty solidly, I thought. What turned to be what should have been me nervous about playing her and going out in two, ended up with me winning! I ran to Deanna and expressed my amazement.

Marissa is a good friend and we would drink to the day later that night playing one-pocket with friends. 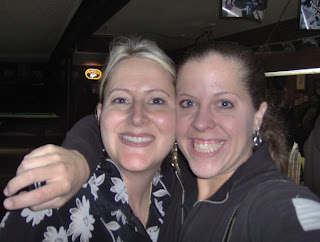 Me and Marissa (she's GREAT at arm-length photos!!)
I then played Sherri Smith next and won. Next up was Bonnie Plowman. This match was crucial. This was for 13th place. If I win, I get at least 4th in the end-of-year rankings; lose.. and I tie for 5th. I ran out to the 9-ball the first rack but missed it. :( Then she simply played so well! Free-stroking, no worries, running out, playing very good position. I didn't have a chance and lost. :(

BUT - I did end the year ranked 5th! On Sunday, I recuperated from my drinking by helping run the tournament instead of playing in the second chance event. Pizza tastes so good after a night of drinking!