I saw this post from FaceBook the other day and as par the course for me, I wanted to blog about it!  (smile)

This post shows a couple of photos of the committee members of the DFW 9-Ball Tour, "getting ready for season 2020." 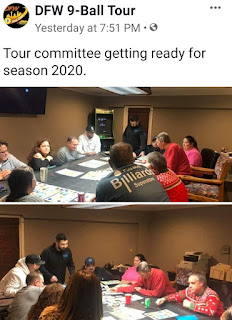 The reason it stood out for me was because there is roughly 15 people around that table, working on the Tour.

The difference is, I was a one-woman shop.  Don't get me wrong, I had a few advisors I would bounce ideas off of, and I ALWAYS spoke to the sponsor of the tour (Mike Hoang of Omega Billiards) to get his suggestions and/or confirmation of ideas.

Because I helped run the Ladies Tour in Texas for nine years, I was very seasoned and felt very comfortable in the role.  Further, I am extremely conscientious (maybe too much) and therefore updated the website and put out FB announcements routinely, frequently, and often.  I also was on top of writing the articles, taking photos, running the tournaments, etc.

I always worked hard to get the calendar ready early for the next year - the players were anxious to know the dates. I would call and try and confirm locations, which took a ton of time, and also ensure the dates didn't conflict with other big tournaments. Every October when the last location/date was confirmed for the next year, I'd throw my fists in the air with such happiness and satisfaction! I would be ELATED! It's such a big thing to get finalized, whew! But, all this was done by little 'ole me.

I always needed a couple of helpers at the events and luckily had some great help all those years - couldn't have run such successful events without them.

To see such a large committee for the new tour tells me a few things.  One, each person probably brings a certain talent to the group, which is great for a business.  Two, it's great they are planning things together - the success of a committee is to ensure all have input and know the vision of the business.  Three, that they are taking the responsibility of the Tour seriously (which of course I LOVE).  Four, I shouldn't have ran the tour with so little help all those years.

Number Four is the reason I wanted to write today.  I remember when I announced I was stepping away, one of the players told me they wish they knew I was burnt out and they could have helped me, so that the Omega Tour could keep going. He and another player even offered to help me, and I immediately felt anxiety and stress... I didn't want to even be "just an advisor," they reassured me.  By then, I was way too ready to stop being a Tournament Director, a Baby Sitter, and down right exhausted.

Do I wish I had a committee of people to help me?  Actually, no.  lol.  While running the Tour solo was in reality not a good idea, lol, but in the end - it was what was meant to be.  It allowed me to remove myself completely from running a tour and to step away about 1,000,000 miles, lol.

I am a FIRM believer that everything happens for a reason.  I am extremely thankful Mike Hoang and Rusty's Billiards believed in me, which helped start my dream to run a Tour in DFW for the players. While 7 years later I stepped away, it allowed for another Tour to jump in and continue the dream.

Me stepping away was beneficial to so many people. For myself, I now have more peace and happiness away from the pool room. For the committee members, the DFW 9-Ball Tour is allowing for new people to gain experience and/or showcase their talent/experience. For new pool players, a Tour continued in the area. And most importantly, for all the players and businesses in DFW, a Tour continued in the area and that is the best gift ever!