While I wasn't able to submit an interview for the July and August edition of the online magazine, Billiard Buzz, I did get an AMAZING interview with Steve Lipsky for the September edition.

I realize I am biased, but I promise you will also enjoy it and think it's amazing as well.

Please take some time to read this interview with Steve Lipsky! He graciously said yes when I asked if I could interview him and I am sincerely over the moon with this interview.

His responses are funny, thought-provoking, and said in a way I am enamored by. I can't wait for you all to read it - you will see for yourself why this interview is priceless.

I want to also add what a JOY it was to interview Steve. He was gracious and kind with his words as we went through the process. We had more revisions than most, only because we took more time than usual to work on it and also because every new answer promoted me to want to ask another question, haha! He was very complimentary about me on social media about working with me, and I truly feel the same about him.

The other thing I want to say is, in this interview, while it wasn't the intention at all, I asked him about several other players. It didn't start that way at all - I asked the normal questions I usually ask, but when he would answer, he would bring up someone in the pool world. Normally, I don't ask about others too much as I want the interview to focus completely on interviewee. But I recognized right away that Steve would have insight about certain people we may never know more about. Further, his way of describing his friends was interesting and captivating.

It was natural for me to ask about George (Ginky) SanSouci, as he is from New York and passed away way too young. Steve talked very highly of him and how he helped him with his game. And then Steve mentioned a poker pro (Nick Schulman) who started out playing pool and was a real good friend of Steve's before he became a poker pro (this is a truly interesting story!).

I debated to ask Steve about John Schmidt (for those not aware, after trying weeks on end in a row, John ran 626 balls on May 27th of this year, beating the long-standing 526 ball run record by Willie Mosconi), but I wondered if Steve had any thoughts about the high run and boy did he ever! So insightful and nothing I even remotely thought of. Steve then mentioned in an answer how impactful Danny Barouty was to him (pretty cool connection and story!). But I then asked him in the interview, "You speak of Danny Barouty as if we all should know him – for those who don’t, tell us about him real quick, please." And again, his answer was so entertaining and interesting!

Steve has a way with words. I hope you read his interview soon (if you haven't already). 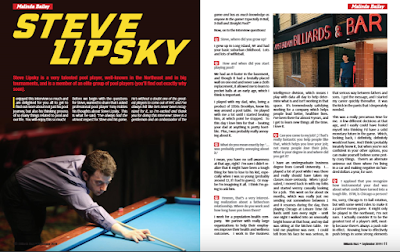