One thing that bothers non-smokers is when smokers light up their cigarettes near our matches.

If it's an opponent or someone playing on another table, we just try to adjust our seating arrangement to anywhere the smoke isn't coming into our face (which we all know the smoke has a B line to the non smokers, lol). 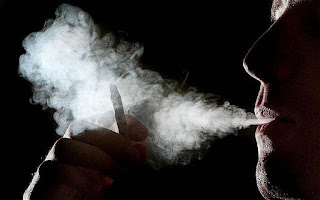 Sometimes I just move, or deal with it (although I admit it's SUPER distracting), or sometimes I might say something (which in itself is a distraction - future blog topic).

It's actually difficult in general to ask someone to move their cigarette.  Most take it offensively or react badly to a request.  I shouldn't feel bad for asking that, but hardly anyone replies, "oh I'm sorry, sure I'll move my cigarette," with a smile on their face.

If anyone has a suggestion for how to ask this, please let me know!

During the August Omega tournament I overheard a player ask a bystander to move because they were smoking close to their match and it was bothering/distracting him.

What was different this time was he explained the situation, which I thought was a smart idea.  Maybe explaining this helped so the guy didn't take it wrong.

After he asked if he could move because of the smoke he explained, "I'm playing a match right here and I can't move.  You can move, though, because you aren't playing, and I would really appreciate it."

I really like that approach!  Maybe I'll use that while in match if a bystander is smoking near me.

What would be really cool is if the smokers had to take it outside! That's a major reason I came back to playing pool again. Living in Canada does have its advantages.