The pool world is actually a very small universe in the universe.  We all know each other and if we stay in the same town, we see each other grow up into mature adults.  Well, most of us, lol.

So it's sad to me that they way we acted when we were immature (young), that "stigma" still carries over into adulthood.

I am even victim sometimes of judging people by their past.

But, I wish none of us did.

Most of the people we know, I mean like 98% of them, grow up and mature and outgrow their (our) stupid immature ways of either throwing temper tantrums, or being rude, or not thinking before speaking (as some examples).

I played scotch doubles with a guy in Vegas for BCAPL Nationals back in the mid 90s.  I didn't play that good back then (hell, neither did he), but he needed us to do well because he needed money.

Well, I didn't play good because I wasn't a good player.  I heard he told a few of my friends (because he was upset) that I "stepped on my dick."

Boy was I mad he was talking about me!  (even tho I didn't know what that meant at the time, lol!  Now I know it means I basically caused us to lose).

But, I was also immature back then so I didn't handle his criticism well or talking about me behind my back very well.

Fast forward 20 years and he played with a friend of mine in Vegas BCAPL Nationals last year.  They got in the money and were a great team together.  I overheard her say, "He's the best partner I've ever had!"

It shows how much he has matured!  He is now loved as a partner.  And he wouldn't dare talk bad about her because he now knows better as he has gotten older.

Yet, I still see people judged for how they used to act.  Although we think we know them still because we've known them for so long, people DO change.  People DO mature (well, most of them).  So, when you see someone from your past, because as we know the pool world is very small and you will run into people you played pool with years and years ago, give them a chance to show they aren't immature anymore.

Maturing is actually a very beautiful thing.  It also FEELS good.  Not only seeing it in others, but ourselves as well.

So, don't badmouth someone you hadn't see in a long time because they acted a fool or mean or rude 10-20 years ago.  Of course, as we mature we already know not to do that badmouthing anymore, too, huh? 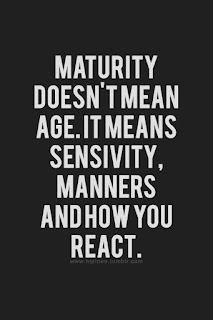