The Cueist Finding His Stroke

Latest thoughts from The Cueist:

So I've been slowly going out to play a little more pool. My first time back to hitting my first ball was about a week after my previous post. My Wednesday league had our league banquet, which was mostly to give the payouts for a very short season. But nonetheless, I went out there mostly to get out of the house. Usually, they have a small tourney to pass the time, but I had no intention of playing it IF they had one. I wanted to hit a few balls and find my stroke, which had been on an extended hiatus.

So, one of the shots that I spent a ton of time practicing was a stroke shot with inside English. I set the object ball on the spot, and the cue ball on the head spot. I also set up a ball on the short rail closest to the head spot, so you have to avoid the scratch, and go 3 rails for shape on the next ball. I get down on the shot, and my eyes are having a hard time adjusting to the sight picture. I guess it had been THAT long. LOL. I do a few warm up strokes and my arm feels so weird doing the cueing motion again. So I stand up, step into the shot and concentrate on the shot. Surprisingly, I fired it in center pocket, avoid the scratch, and float the 3 rails for shape. One of my teammates saw and said, "Wow, haven't been playing my a$$!" I laughed and set up the shot again. Stepped into it, and boom....center pocket again. Now, this is one of my most practiced shots so I figured I made the shots due to the fact that it was so comfortable to me. So, I decided to break a rack of 9-ball and try to beat the ghost for a few games.

Now, this is where the wheels promptly fell off. LOL.

I took ball in hand and got perfect shape on the 2. Now, the 2 is about center table, and I had to force follow with inside for shape on the 3. So I get down on the shot and I missed the shot by a diamond. I set it up again, and same result. Now, I set it up one more time and adjusted.....missed the shot by 1/3 diamond this time - so I was improving, LOL. So I decided to scratch that and go back to the basics and do a drill my old coach Gordy used to have me do. 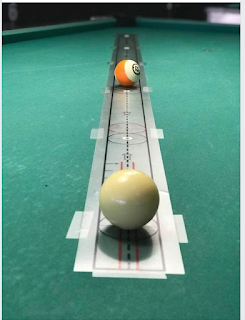 While I didn't have the actual track, I just set up the balls accordingly and practiced on mechanics. It took me about 30 mins, but I managed to complete the drill after lots of frustrations. But as you (Melinda) mentioned in a previous blog, if you have a good stroke then we'd have nothing to worry about. But, I sure was worried there!!

Now, since then I've gone to practice about once a week and have been sparring with a guy that's about 2 points (Fargo) lower than I am. He's got access to a table at home, but hasn't really competed either aside from playing the ghost at home. So the first night, we played 3 races to 7. I lost 7/1, won 7/3, then won hill/hill. The following week, the same exact result. The 3rd session, I lose hill/hill, win 7/1, win 7/2.

The practice was leading up to a goal in mind, and that was me playing in a tournament coming up. Last week, I made it a point to go play 2 times that week, and I felt like I was about 90% compared to my old self. But, while my muscle memory may have been there, along with my stroke, my mental game wasn't near at 90% come to find out.

So, the morning of the tourney, I woke up early and made it a point to stop and get breakfast at God's chicken house (Chick-fil-A). The poolroom is about 50 mins away so I got there with plenty of time to hit balls and finish my breakfast in the car. While finishing breakfast, the weirdest thing happened....I started to get nervous! Now, don't get me wrong, I get nervous all the time. But I haven't felt nerves BEFORE walking into the poolroom since the early part of my pool career. The only difference was that this time around, I was nervous about not playing up to my usual expectations, and making a fool of myself. I mean, last year I worked so hard on my game and was finally getting the results that I wanted in my league. So, I felt like I somewhat had to keep getting some decent results.

After the draw was complete, I realized I had to play a guy who is a low 600s Fargo on paper, but I'm the favorite. But he's been going out of state to play during the pandemic, while I've been doing home projects and woodworking projects. LOL. So it was a tough first match.

In my mind, I thought "oh great, there's going to be an audience for this attempt of mine to play pool again." Aside from that, the nerves started to creep up again immediately and I felt my grip hand quiver a bit during my PreShot Routine. So, I had to reset multiple times on each shot to try and shake that feeling.

Naturally, because of the extra concentration, I found myself playing pretty good actually. I gave away 2 games but overall, played well and made it to the hill first. I was up 7/2 and was firmly in the driver's seat. I was finally able to close it out with a score of 7/4.

My next match was against a good friend, teammate, who has tons of knowledge. So, by me not being at 100%, I knew I had to play good just to make it competitive. I played great, only made 2 mistakes. But unfortunately, he only made 1 mistake! Damn him, lol. He beat me hill/hill. It was a little disappointing because I played soooo well. But, I can't be too upset because he really did play almost flawless.

My next match was on against that sparing partner I mentioned (figures, right?). I didn't play too well in that match, and I ended up losing hill/hill. But, considering I haven't competed in five months, I'm both disappointed and proud.

Like you said in your blog.....give it time, you'll be fine if you haven't been playing much.