Danielson - Back in the Game

So, Danielson has been playing pool a little bit more than what he was before. I mentioned that thing called grownup responsibilities (ie, "life") kept him from being able to play and focus on pool like he did in the past. But, as most people who take a little step away finds out, we never really lose the desire to play and therefore it came back to Danielson, as well.  Yay!

He played in a tournament a couple of weekends ago and of course the first thing I asked him (kinda interrogating, oops) was, "So, uh, do you have your checklist?"  As I've said a million times in my blog (I could be exaggerating again), reading the reminders on your checklist before every tournament or every match will really help you. And because Danielson hadn't been playing or competing in several months, reviewing his checklist would really be beneficial for him.

He said the checklist was in his case still, so that was good news.  I honestly do not know if he took it out and actually took a peek at it or not, though.  But, I can be hopeful because at least it was on his persons, right, lol, and not lost or forgotten.

He provided an update a few days after the tourney and he said he had lost his first match, but it was really close.  He shared that overall he played well, but he missed late in the rack a few times.  He thinks because he lost focus.

This is actually something I've been trying to explain what I have personally "lost" by not competing anymore.  Strong and solid fundamentals help us make the balls in front of us, but our strong fundamentals do not help our mind from wandering, getting distracted, or thinking of other things.

Eventually, what you all will find (if you haven't already) is the more often you compete, the stronger your mental toughness becomes. The brain is a muscle, too, and when you play in a lot of tournaments, that muscle (the brain) gets stronger and stronger.  You will find that you are more mentally prepared for each future tournament because of this.

However, when you don't compete often, then that muscle acts like any other muscle you aren't strengthening and therefore it may not show up well in a match for you.

While taking a break is sometimes very good for your game, if the break is too long (I'm talking 6 months or a few years or more), when you come back you're not as mentally strong as you used to be.  Good thing for us tho, because the brain is a muscle, putting time and effort working on it will strengthen it again.

I want to reiterate your fundamentals will still be there if you had a strong, solid fundamental pre-shot routine before your "break." What I recognized in myself was my fundamentals were still very strong and so I played pretty sporty the few times that I picked up a cue and hit a rack or two. But as soon as I competed, the pressure got to me and I couldn't play well or perform my best. So, it's not my physical skills that have gone down, it's my mental toughness that isn't as strong as it used to be.

So, Danielson told me without even prodding from me (ah, Grasshopper!), that what he needs to do is practice a little more maybe with some cheap gambling sets so that he can work on his focus which in turn will strengthen his mental toughness that is currently just locked away, but ready to come out.

I'm excited he's playing again! I just hope that he doesn't get frustrated with the process to get back into competition form and decide to throw his cues in the trash LOL. I'm just kidding - I doubt he would do that.  But my point is it can get frustrating when your game isn't where it used to be and it takes patience while you wait for it to come back.

But, if Tiger Woods can do it, so can Danielson ;) 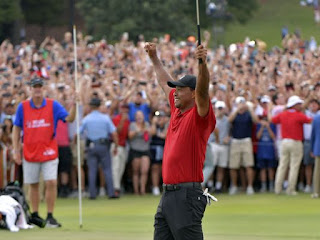